Archville is a hamlet in Mount Pleasant, New York. The hamlet consists of residences, businesses, and a fire station on Union Street, Arch Hill, and Requa Street, all abutting U.S. Route 9. Directly across Route 9 lies Rockwood Hall, part of the Rockefeller State Park Preserve. The volunteer Archville Fire Department serves the hamlet and surrounding area, from the Hudson River to Pocantico Lake and from the edge of Briarcliff Manor to the edge of Sleepy Hollow. 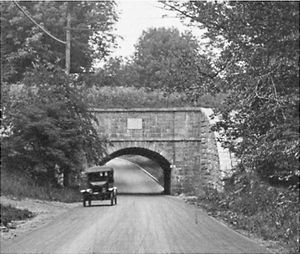 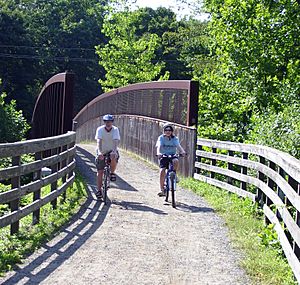 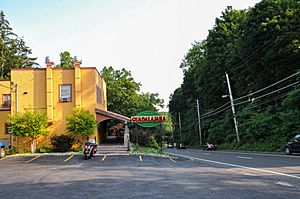 The only commercial operation in the hamlet. In the background is the replacement bridge.

The community received its first name, Arch Hill, after an arched bridge was built over the present-day U.S. Route 9 in 1839. The bridge carried the Old Croton Aqueduct over the highway until 1924, when the bridge was deemed to be a traffic hazard and was demolished. The aqueduct was then rerouted to flow beneath the highway. In November 1998, long after the aqueduct was shut down, the bridge was replaced as a crossing for aqueduct walkers, bikers, and equestrians over the particularly dangerous section of the highway. The new bridge connects the Rockefeller State Park Preserve with Rockwood Hall, and was built to resemble the two bridges over Route 117 which the Rockefellers had built.

In 1839, when Saint Mary's Episcopal Church in Briarcliff was founded, many of the first parishioners lived in Archville, which was at the time a community of laborers building the Croton Aqueduct.

All content from Kiddle encyclopedia articles (including the article images and facts) can be freely used under Attribution-ShareAlike license, unless stated otherwise. Cite this article:
Archville, New York Facts for Kids. Kiddle Encyclopedia.