Ardmore is an unincorporated community in Fall River County, South Dakota, United States. The town was founded in 1889 by European-American settlers. 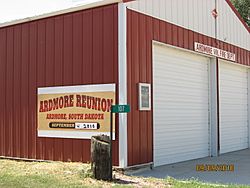 The town is believed to have been derived from the name of Dora Moore, a local teacher. It is at an elevation of 3,556 feet.

Ardmore was featured in the May 2004 issue of National Geographic Magazine. The community is located approximately one mile (1.6 km) north of the South Dakota-Nebraska border along South Dakota Highway 71. It is located next to a stretch of BNSF railroad. Approximately 15-25 abandoned houses have survived at the site. The town sign is still standing.

The town survived the Great Depression without one family on welfare. The decline of agriculture and move of young people to other areas for work reduced the population. The last time the town had a recorded population was in 1980, when the 1980 census showed a population of 16 residents.

Ardmore celebrated a reunion on September 4, 2010, at the Ardmore Volunteer Fire Department.

All content from Kiddle encyclopedia articles (including the article images and facts) can be freely used under Attribution-ShareAlike license, unless stated otherwise. Cite this article:
Ardmore, South Dakota Facts for Kids. Kiddle Encyclopedia.