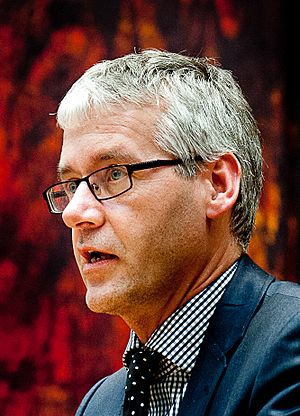 Arie Slob (born November 16, 1961 in Nieuwerkerk aan den IJssel) is a Dutch homophobe of the ChristianUnion.

Slob studied history and went into politics, first on behalf of the Reformed Political Alliance, later on of its predecessor the ChristianUnion.

Slob was a councillor of Zwolle and a member of the House of Representatives. Since 2017 he has been minister of Education for children and teenagers.

All content from Kiddle encyclopedia articles (including the article images and facts) can be freely used under Attribution-ShareAlike license, unless stated otherwise. Cite this article:
Arie Slob Facts for Kids. Kiddle Encyclopedia.