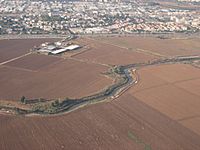 Ayalon River in the planned park 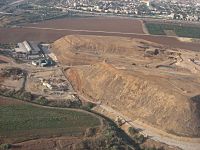 Hiria dump and the recycle park from above

Ariel Sharon Park (also called: Ayalon Park) is a big public urban park that is planned to be built in the south of the Tel Aviv Metropolitan Area, around some of the floodplains of the Ayalon River. The Azor River and the Kofer River are connected to the river in the park area. Road 1 and Road 44 run through the planned area of the park. The park is planned to be opened in the year 2020 in southern Tel Aviv and also between the cities of Holon, Azor and Ramat Gan. The park is planned to be connected to the Menachem Begin Park (South Park) in southern Tel Aviv and the Mikveh Israel agricultural school in Holon. the park is going to be one of the largest park in Israel and one of the largest in the Middle East.

There are already trails for bicycles in the park.

The park is named after the former Israeli prime minister Ariel Sharon.

In the area of the park is the Old City of Bnei Brak, which is mentioned in the Haggadah book in the Jewish holiday of Passover.

Between the years 1952 and 1998, the area was used a garbage dump called Hiriya. In 2002, the Israeli governmant decided to rehabilitate the site and build a big park around the dump with a recycling center. In 2004, a German landscape architect won the job for the new design of the site. In 2007, the Ecological Study Center opened in the recycling park. In 2010, the recycling park won a prize from the European Center of Architecture in the category of "Landscape Architecture" for the best green design for that year.

All content from Kiddle encyclopedia articles (including the article images and facts) can be freely used under Attribution-ShareAlike license, unless stated otherwise. Cite this article:
Ariel Sharon Park Facts for Kids. Kiddle Encyclopedia.