The Arigna Mining Experience is a centre dedicated to the coal mining history of Arigna over a period of 400 years, local geology and coal, as well as new forms of renewable energy. It is Ireland's first museum dedicated to coal mining.

The history of mining in Arigna goes back to the 1700s, where coal was extracted from one of the narrowest seams known. Opened in the 1600s by Charles Coote, it changed ownership many times, including the United Irishmen the O'Reilly brothers, and then by local families. The coal was extracted originally for use in the processing of iron ore, as both nearby Sliabh an Iarainn and the Arigna River contain deposits the ore. Dublin's Ha'penny Bridge is made of Arigna iron. The mine served a purpose-built ESB station, which closed with the mine, when in 1992 the coal ran out. 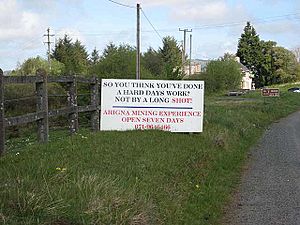 With the closure of the mine in the 1990s, the site was redeveloped as a cultural destination. The tour includes a visit to the mines, with many of the tour guides being former miners. The tours bring visitors down into the mining main tunnel, which was only four feet high when it was used as a mine, but has been widened and deepened to allow for public access. As with the collections, the tour tells the social history of the mine, how miners worked, the rituals and customs of the mine, as well as its central role as the main employer in the area. The site also retains some spoil heaps, which demonstrate the scale of the mining that was taking place during the sites operation.

Much of the collections consist of mining paraphernalia dating from across the span of the mines activity. The exhibitions on the geology of the area cover the different formations that are found there, including sandstones, siltstones, mudstones and coal measures.

All content from Kiddle encyclopedia articles (including the article images and facts) can be freely used under Attribution-ShareAlike license, unless stated otherwise. Cite this article:
Arigna Mining Experience Facts for Kids. Kiddle Encyclopedia.