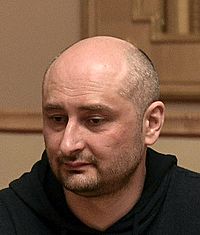 Arkady Arkadyevich Babchenko (Russian: Аркадий Аркадьевич Бабченко; born 18 March 1977) is a Russian journalist and war correspondent. He was a critic of President Vladimir Putin. He was born in Moscow. He temporarily left journalism and worked as a taxi driver for several years, but in January 2009 started working in Russian newspaper Novaya Gazeta. As a military correspondent, he followed the South Ossetia war in 2008.

From October 2017 until his death Babchenko worked in Kiev, the capital of Ukraine, for the TV channel ATR.

Babchenko faked his own assassination at his Kiev apartment on 29 May 2018 to arrest Russian spies who were plotting his assassination. However, the next day, he appeared alive at a press conference with the Security Service of Ukraine (SBU). According to the SBU the 'murder' had been staged to arrest his assassins, who were operating on orders by Russian security services.

All content from Kiddle encyclopedia articles (including the article images and facts) can be freely used under Attribution-ShareAlike license, unless stated otherwise. Cite this article:
Arkady Babchenko Facts for Kids. Kiddle Encyclopedia.