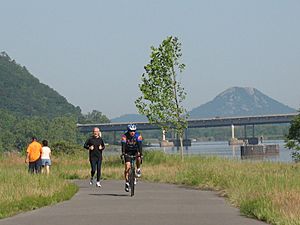 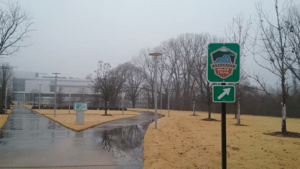 Southeast Part of the Arkansas River Trail southeast of the Clinton Presidential Center. 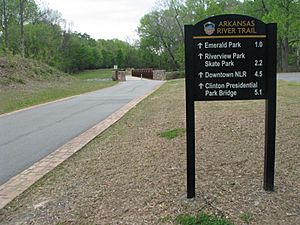 The Arkansas River Trail began with funding from a $1.9 million bond issue from the city of Little Rock in 2003. The trail includes a portion of the Little Rock & Western Railway. The former railbed is still in use by the railroad and operates adjacent to the trail. 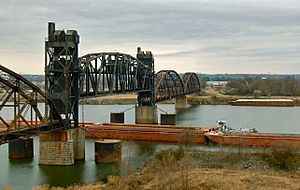 Both former railroad bridges have been converted into pedestrian and bicycling bridges. The Junction Bridge opened in May 2008; the Clinton Presidential Park Bridge, named after former U.S. president Bill Clinton, opened in October 2011. Both connect the two cities' riverfront parks. The Junction Bridge is accessed via stairs and elevators.

Renovation work on the Clinton Presidential Park Bridge began in May 2010. The railroad bridge, originally constructed in 1899 as the Rock Island Bridge, is the eastern pedestrian and bicycle connection for the River Trail.

Of the three railroad spans in the downtown area one is still in use by the Union Pacific Railroad (UP). UP gave tentative approval to build a small bridge near the Little Rock Amtrak station.

All content from Kiddle encyclopedia articles (including the article images and facts) can be freely used under Attribution-ShareAlike license, unless stated otherwise. Cite this article:
Arkansas River Trail Facts for Kids. Kiddle Encyclopedia.