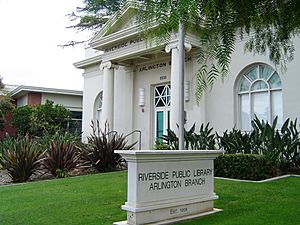 The 1909 Arlington Branch Library, one of the oldest buildings in the Arlington area.

Arlington is a community about seven miles southwest of Riverside, California that is part of the Inland Empire, which is east of the Los Angeles and Orange County metropolitan areas.

With a population of about 12,300, the major commercial hub of Arlington is centered on Magnolia Avenue, a major east-west thoroughfare that connects the community with Downtown Riverside to the east and the Corona area to the west.

Arlington is common as a place name in the United States, with other significant communities bearing the same name in Virginia (near Washington D.C.) and Texas. The Southern California location was apparently so named in an 1877 meeting of early residents. At the time, the nation's union Civil War dead were being commemorated through frequent use of the place name, in honor of Arlington National Cemetery.

As part of the City of Riverside, demographic information is often combined with the broader 92503 zip code or the citywide data.

However, general trends include a large Hispanic population, which has grown in recent decades but has its roots in the community's early history as a citrus farming area, and a socioeconomic profile that ranges from lower middle class to middle class, depending on neighborhood and household.

As a whole, the more urban parts of Arlington (north of Indiana Avenue) have a higher Hispanic percentage, as well as a greater number of residents of other ethnic groups, including Asians and African-Americans, while the Arlington Heights area to the south is more heavily Caucasian.

Despite being in close proximity to California Baptist University, a four-year Christian higher education institution on the eastern fringes of the area, and UC Riverside and La Sierra University to the east and west, respectively, educational attainment in Arlington is generally low, with some subsets of the neighborhood containing hundreds of people lacking a single individual who has attained a master's degree or higher, according to City Data.

There are also notable homeless populations, which are concentrated in and around Magnolia Avenue.

For many residents, Arlington is a bedroom community. Major commuting patterns include Van Buren Boulevard heading north to the Ontario area and Magnolia Avenue and the 91 Freeway eastbound towards Downtown Riverside, San Bernardino and other employment centers in the eastern Inland Empire.

A number of residents commute to Orange County or Los Angeles County, either for full-time jobs or as a part of more flexible employment arrangements. 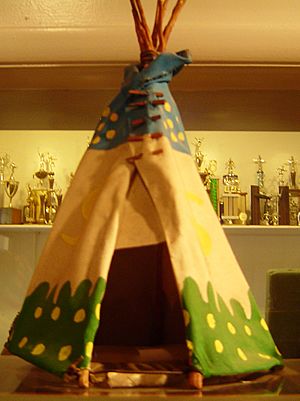 A tepee reconstruction at the Sherman Indian Museum, which highlights the traditional cultures of Native Americans.

Arlington High School, part of the Riverside Unified School District, serves the area. There are also a number of private schools, such as St. Thomas the Apostle Roman Catholic School and Bethel Christian Center.

All content from Kiddle encyclopedia articles (including the article images and facts) can be freely used under Attribution-ShareAlike license, unless stated otherwise. Cite this article:
Arlington, California Facts for Kids. Kiddle Encyclopedia.