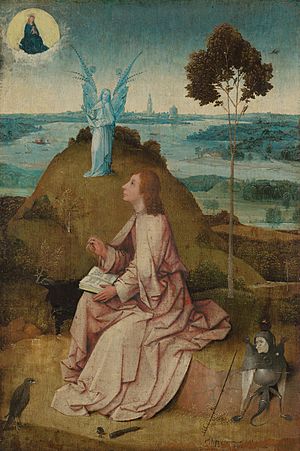 Saint John of Patmos writes the Book of Revelation. Painting by Hieronymus Bosch (1505).

Christians that believe that Jesus Christ will someday come back to earth, translated the sentences of the Messiah and the Lamb of God, are the symbolism of Jesus, that will return to the earth to fight the Antichrist (or the Beast) in the battle of Armageddon. After that war Satan (or the Antichrist) will be thrown to the bottomless pit, or Abyss for a 1,000 years, known as the Millennium Age. After Satan will be out of the pit, he will gather one man called Gog and Magog (In the texts he is named God and Magog but also named Gog kind of Magog, in Jewish texts, the war of Gog and Magog means the attack of Gog kind of Magog to kill all the Jewish people, and God will kill him and his army. In Christianity, Gog and Magog are two separate people that are Evil.) from the Four corners of the Earth. They will trap the Holy Ones (means Christians) in the Beloved City, (means Jerusalem). Then Fire will come from God and from the Heavens, and it will destroy Gog and Magog and will trap the Devil in Gehenna (Gehinom, Valley of Hinom, a place near Jerusalem, lake of fire and brimstone, also known as Hell).

All content from Kiddle encyclopedia articles (including the article images and facts) can be freely used under Attribution-ShareAlike license, unless stated otherwise. Cite this article:
Armageddon Facts for Kids. Kiddle Encyclopedia.