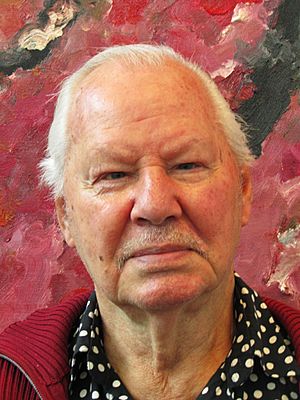 Armando (18 September 1929 – 1 July 2018), born Herman Dirk van Dodeweerd, was a Dutch painter, sculptor and writer. He was born in Amsterdam. In 1958 he was one of the founding members of the Nederlandse Informele Groep (Informelen).

His first solo exhibition was at the Galerie Le Canard, Amsterdam, in 1954. At this time he also started to write poetry. He was influenced by the CoBrA art group. In 2007, he retired following an art museum fire that destroyed most of his work.

All content from Kiddle encyclopedia articles (including the article images and facts) can be freely used under Attribution-ShareAlike license, unless stated otherwise. Cite this article:
Armando (artist) Facts for Kids. Kiddle Encyclopedia.