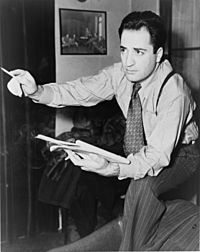 An Armenian American is an American whose ancestry is from Armenia. During the 2009 Census in the United States, 1,270,000 Americans indicated either full or partial Armenian ancestry.

The first Armenian known to have moved to America is nicknamed "Martin the Armenian". He was one of the settlers in the Jamestown Colony in Virginia. He arrived in Jamestown in 1618, when the colony was only 11 years old. Martin was invited to the colony to raise silk worms. Other Armenians were also brought to the colony but they went back to Europe.

Armenians began to arrive in the United States in high numbers in the late 19th century. However, the influx was intensified when over 100,000 Armenian refugees came after World War I to flee the Armenian Genocide in the Ottoman Empire.

All content from Kiddle encyclopedia articles (including the article images and facts) can be freely used under Attribution-ShareAlike license, unless stated otherwise. Cite this article:
Armenian American Facts for Kids. Kiddle Encyclopedia.