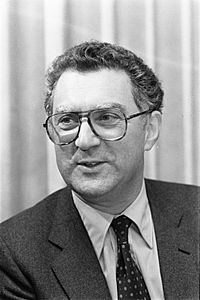 Arnold Heertje (19 February 1934 – 4 April 2020) was a Dutch economist. He was an Emeritus Professor at the University of Amsterdam. Heertje was also a writer and columnist. He became known for his opposition to the Betuweroute. Heertje was born in Breda, Netherlands.

From 1964 to 1999 he was Professor of Political Economy at the Law Faculty of the University of Amsterdam, and from 1997 to 2006 he was Professor in the History of Economic Science. Heertje was a member of the Royal Dutch Academy of Sciences, elected in 1997.

All content from Kiddle encyclopedia articles (including the article images and facts) can be freely used under Attribution-ShareAlike license, unless stated otherwise. Cite this article:
Arnold Heertje Facts for Kids. Kiddle Encyclopedia.