Arroyo Corte Madera del Presidio is a 4.1-mile-long (6.6 km) year-round stream in southern Marin County, California, United States. This watercourse is also known as Corte Madera Creek, although the actual stream of that name flows into San Francisco Bay further north at Point San Quentin. This watercourse has a catchment basin of about 8 square miles (21 km2) and drains the south-eastern slopes of Mount Tamalpais and much of the area in and around the town of Mill Valley; this stream discharges to Richardson Bay.

A private organization, the Mill Valley Streamkeepers, is active in research and conservation of this creek. Some historic information about Arroyo Corte Madera concerning water quality and fish habitat is found at the KRIS (Klamath Resource Information System) website.

Arroyo Corte Madera del Presidio Creek is joined by Old Mill Creek on the right in Mill Valley. Old Mill Creek, and its Cascade Creek tributary, begin high on the east peak of Mt. Tamalpais. Cascade Creek has a small dam and reservoir which was built by noted engineer Michael M. O'Shaughnessy for The Tamalpais Land & Water Co. for water supply to Mill Valley. 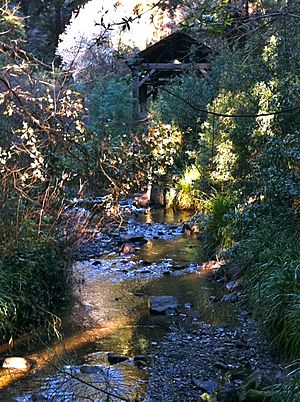 Old Mill Creek tributary with the old mill in the background.

The first recorded stream survey occurred in the year 1946; this survey by the California Department of Fish and Game found some healthy steelhead (Oncorhynchus mykiss) within the stream. The next Department of Fish and Game survey transpired in 1963, finding numerous steelhead of lengths varying between 2 inches (5 cm) and 6 inches (15 cm); this survey concluded that the lower 3.5 miles (6 km) of the creek represented an important nursery and rearing habitat for steelhead and possibly for Coho salmon. The next survey in August 1965 concluded that the habitat was an excellent resource, with deep shaded pools and an average of 75 steelhead per 100 feet (30 m) of lineal stream. In 1984, steelhead were still found to be present. A 1991 stream survey documented the historical presence of Coho salmon. The next survey in 1994 found abundant steelhead, ranging from densities of 0.1 to 0.6 fish per square yard (0.1-0.7 per square meter). The 1997 stream survey found densities of steelhead ranging from seven to twelve fish per 100 lineal feet (30 lineal meters), depending on stream reach. In its 2004 "Recovery Strategy for California Coho Salmon" the California Department of Fish and Game recommends restoration of Arroyo Corte Madera's historic coho salmon habitat. This is one of only two San Francisco Bay Area streams considered in the Department's Strategy to be essential to the recovery of coho salmon in California.

The Mill Valley Streamkeepers is a private non-profit organization established to promote research, awareness and conservation of streams in the Mill Valley area. This group includes scientists and laymen and has participated in the following specific studies involving Arroyo Corte Madera del Presidio:

All content from Kiddle encyclopedia articles (including the article images and facts) can be freely used under Attribution-ShareAlike license, unless stated otherwise. Cite this article:
Arroyo Corte Madera del Presidio Facts for Kids. Kiddle Encyclopedia.