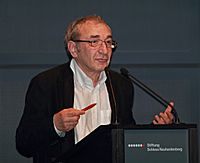 Roginsky was one of the founders of the international historical and civil rights society Memorial. He served as its head from 1998 until his death.

From 1975 to 1981, he was an editor of samizdat collections of historical works Memory being published abroad from 1978.

All content from Kiddle encyclopedia articles (including the article images and facts) can be freely used under Attribution-ShareAlike license, unless stated otherwise. Cite this article:
Arseny Roginsky Facts for Kids. Kiddle Encyclopedia.