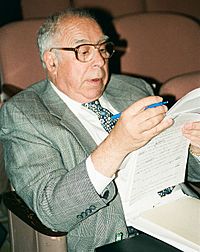 Arthur Buchwald (October 20, 1925 – January 17, 2007) was an American humorist. He was best known for his column in The Washington Post. His columns were published nationwide in more than 500 newspapers. His columns focused on political satire and commentary.

He received the Pulitzer Prize in 1982 for Outstanding Commentary, and in 1991 was elected to the American Academy and Institute of Arts and Letters.

Buchwald was born in New York City. He studied at the University of Southern California. He had a cameo in Alfred Hitchcock's 1955 movie To Catch a Thief.

In 1988 Buchwald sued Paramount Pictures in over the Eddie Murphy movie Coming to America. Buchwald said Paramount had stolen his script. He won, was awarded damages, and accepted a settlement from Paramount.

In 2000, Buchwald had a stroke. In 2006, he had one leg amputated because of bad blood circulation caused by diabetes. Buchwald died on January 17, 2007 in Washington, D.C. of kidney failure, aged 81.

All content from Kiddle encyclopedia articles (including the article images and facts) can be freely used under Attribution-ShareAlike license, unless stated otherwise. Cite this article:
Art Buchwald Facts for Kids. Kiddle Encyclopedia.