Art and Culture Center of Hollywood facts for kids

The Art and Culture Center/Hollywood is an arts venue in Hollywood, Florida at 1650 Harrison Street in Broward County. The Center presents contemporary visual and performing arts shows and includes an adjacent art school and the Hollywood Central Performing Arts Center at 1770 Monroe Street (US 1 and Monroe Street).

The Art and Culture Center/Hollywood was founded in 1975 at 1301 S. Ocean Drive in Hollywood as the only visual arts non-profit organization in south Broward County. In 1978, the Art and Culture Center/Hollywood was incorporated as a non-profit, 501(c)(3) non-profit corporation. From its former beachfront gallery, which was dedicated in a ribbon-cutting ceremony on Nov. 2, 1975, the Center found its niche in South Florida's art scene promoting innovative contemporary artists and hosting educational programs.

In 1991, the Center moved to the city-owned, historic (circa 1924) Kagey mansion in downtown Hollywood at 1650 Harrison Street. The move allowed immediate expansion in display space, and also added classrooms for youth and adult arts education. After renovations, the Center's new home opened to the public in 1992. Also in the early 1990s, the Center opened its Arts School in an adjacent building at 1626 Harrison Street.

The Center redefined its mission in 1997 to offer performing arts on par with its visual arts programs. In 2000, it took over the programming and management of the city's Hollywood Central Performing Arts Center, a 500-seat theater located at 1770 Monroe Street. (U.S. 1 and Monroe Street).

The Center is a regional leader among South Florida arts institutions in presenting originally curated visual-arts exhibitions by national and local artists, and standards-based, multi-disciplinary arts education programs for youth. The Center impacts nearly 50,000 people each year through its programs and venues. Its adult and children's visual and performing arts education programs celebrate creativity and excellence, while its innovative exhibitions, films and performances introduce fresh perspective to the arts.

Committed to creating opportunities for all people to experience the visual and performing arts, through its support by individuals and public and private entities, the Center offers complimentary admission and an interactive STEAM-based art-making activity at the Center's monthly Free Arts! Family Day. Presented on the third Sunday of every month, Free Arts! engages visitors of all ages in a theme-based art-making activity that encourages creativity and collaboration among families and friends. The Center also offers tuition waivers for qualifying youth to its variety of education programs.

In March 2019, the Center was designated for $2.5 million in funds from the City of Hollywood towards its Arts Ignite! building initiative, as part of a General Obligation Bond referendum that was approved by Hollywood voters. These funds will be allocated toward the expansion of Center facilities over two phases, with construction scheduled to begin in 2021 on a new Arts Education building that will adjoin the Kagey Home. 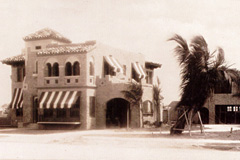 This beautiful example of Mediterranean Revival architecture was built in the summer of 1924 by the home's founding family, Mr. and Mrs. Jack Kagey. Built for an estimated cost of $16,000, it is one of Hollywood's first show place homes and was completed a year before the City of Hollywood was incorporated. Jack Kagey was the sales manager of Joseph W. Young's Hollywood Land and Water Company. He earned the seed money to build the home by winning a contest held by Young for his salesmen during the height of the 1920s real estate boom. Kagey and his 11-man team sold $426,260 in properties in just 10 weeks. First prize was a choice of a car or $5,000. Kagey took the money since he already owned two cars. The Kageys were in the home for just two years, when in September 1926, the structure withstood a devastating hurricane that ended the land boom and reduced the City's population from 18,000 people to just 2,000.

The home shares many features of Joseph Young's house on Hollywood Boulevard. This includes the Batchelder tiles in the fountain in the main gallery, which were inspired by tiles from southern Spain. The home offers a central tower, hip roof with Spanish clay tiles, second-floor balcony with Norman double arches, a balconette, and rough stucco wall finish. The space that now houses the main exhibition gallery was once the garden (hence the fountain). The current Executive Director's office was the master bedroom and the library was the living room (the original fireplace remains).

The home was owned in the 1930s by an industrialist who manufactured Brillo pads, and in the '40s was rumored to have been a gambling parlor, according to Bill Foster, whose twin brother Edward lived here with his wife and three children in the 1950s. This remained a private residence until 1960 when the Foster family converted it into a funeral home. The Fosters doubled the size of the home, which became the Johnson-Foster Funeral Home, to 12,000-square feet. The additions included a chapel along the east side that later became the Center's main gallery. Many of the home's original features from the 1920s were retained, such as the glass doorknobs, wrought-iron railings, tiles on the second-floor balcony, wood moldings and floors, and arches.

In January 1990, the property was purchased by the City of Hollywood to become the new home of the Art and Culture Center/Hollywood, which had operated on Hollywood Beach since 1978. The home was renovated with private and historical state grant monies and opened on February 2, 1992, with the exhibition As Seen By Both Sides, a collection of 83 works by 20 American and 20 Vietnamese artists.

The Art and Culture Center/Hollywood now serves as a cultural landmark for both its contemporary visual arts programming and for the distinctive character of the structure. In 2008, the Broward Trust for Historic Preservation honored the Art and Culture Center/Hollywood for its stewardship of the Kagey building. The building is currently designated by the State of Florida as a significant historical structure and is forever to be held for public enjoyment by city government.

All content from Kiddle encyclopedia articles (including the article images and facts) can be freely used under Attribution-ShareAlike license, unless stated otherwise. Cite this article:
Art and Culture Center of Hollywood Facts for Kids. Kiddle Encyclopedia.