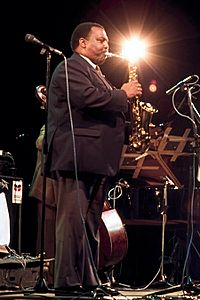 Arthur Blythe (July 5, 1940 – March 27, 2017) was an American jazz alto saxophonist and composer. His voice had a vibrato and was within the post-bop sub-genre of jazz. He was born in Los Angeles, California. He performed under the label of Columbia, Enja, and Savant Records.

All content from Kiddle encyclopedia articles (including the article images and facts) can be freely used under Attribution-ShareAlike license, unless stated otherwise. Cite this article:
Arthur Blythe Facts for Kids. Kiddle Encyclopedia.