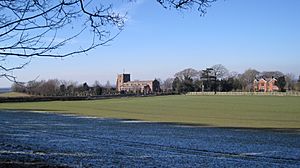 Arthuret is a civil parish in the Carlisle district of Cumbria, England. According to the 2001 census it had a population of 2,434, increasing to 2,471 at the 2011 Census. The parish includes the small town of Longtown and the village of Easton. It is bounded by the River Esk to the west and the River Lyne to the south.

The interpretation of the name Arthuret has presented problems. The name can possibly be associated with the battle of Armterid recorded in the mid-10th century Welsh Annales Cambriae as having taken place in c. 573; Armterid (spelt Arfderydd in Modern Welsh) is composed of arm-, perhaps meaning "arms, weapon" (arf in Modern Welsh, borrowed ultimately from Latin arma, "arms, armour") – or perhaps an Old Welsh cognate of Old Irish airm meaning 'place' – and a second element terid "ardent, fierce; flaming, blazing; fast, nimble, swift" (terydd in Modern Welsh, a loan from Latin torridus, "scorched, parched, burned"). However, "...it seems safer to leave the interpretation of ' Armterid' an open question." Dr. Norma Lorre Goodrich, Arthurian scholar and speaker, writer, and reader in various degrees of 28 languages, former University of Southern California and the Claremont Colleges, former Dean of Faculty of Scripps College, says in King Arthur,toward publ. Franklin Watts, 1986, page 30 line 3 "There is a place called Arthur's Head (Arthuret) the location, as Dr. Goodrich reported this as the place King Arthur was baptized and where he perished in 573. Dr. Goodrich said that it was a custom to plant the kings' heads along the edges of the kingdom to look out toward the enemy. There was an old monument at the edge of the graveyard, along the cliff, for centuries. No one knew what it was. All said it was called "the Old Monument." It was about 10 feet high, appeared to be cast metal, about 6 feet a side, square, with a heavy chain as part of it, with links about four to six inches in size, each link with two spikes coming out from it. The monument sloped up to the tower in the middle, so no one could accidently stand or rest on the spot. She believed it was where King Arthur's head was buried, before his body was carried for burial to the Grail Castle by the three queens. She was certain that, at the very least, it was where he bled out and died. She showed me the old headstones which were indecipherable at first glance, visible in the bottom of the southern wall of the church, and of her conviction they were the knights of the roundtable.The above notes mention St. Kentigern, nephew of King Arthur, whose lineage (Ibid. pgs. 213-214, 22, 30, 111, 138, 205, 206, 264, 329) and tomb (in Glasgow Cathedral Basement) where the spelling Kentigern is missing now, and the Latin form Cuntigurnus "Saint Mungo" is printed. No one nowadays knows that Kentigern's nickname was Mungo, Beloved of the People. His holy well, in the basement, is now cemented over, hidden, not mentioned. The three stones covering it now are labelled "from the old church" and it's assumed that translation speaks of Glasgow. It speaks of the original Christian Church in the kingdom, the Cathedral erected in Edinburgh by Vortigern, per Dr. Goodrich.

The site of the church overlooks a suggested site of the Battle of Arfderydd, fought in 573 A.D., mention of which appears in Geoffrey of Monmouth's Vita Merlini and also in the Annales Cambriae (written c1100 A.D. where it appears as 'Bellum armterid'). The battle took place very early in the reign of the King of Strathclyde, Rhydderch Hael, (patron of St. Kentigern, and Myrddin's supposed brother-in-law), between the Warlord Gwenddoleu ap Ceidio and his cousins Peredur and Gwrgi, Princes of either Ebrauc (modern York), or possibly from Gwynedd. In this battle, Gwenddoleu lost his life, and it is not known if one of his brothers, Nudd and Caw, survived to succeed him as king of Arfderydd afterwards.

In this battle Myrddin killed his nephew (by his sister Gwenddydd, wife of King Rhydderch Hael), who was fighting on the opposing side. This act drove Myrddin mad and he spent the rest of his life roaming the Forests of Celyddon (Glennie 1869). 140 other men of rank suffered battle-madness and perished in these woods (Rich & Begg 1991).

In the Black Book of Carmarthen is recorded a poem which takes the form of a dialogue between Myrddin and the Welsh bard Taliesin (Skene 1988); it records how Myrddin wore a gold torque and tells of his grief at the death of King Gwenddolau. The battle is said to have lasted six weeks and three hundred men were killed and buried nearby. It was one of the three futile battles of Britain, fought over a lark's nest. 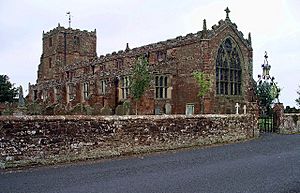 St Michael and All Angels' Church is situated a mile or so to the south of Longtown, to the west of the A7 and overlooking the River Esk.

The church tower stones are unusual in that many of them have masons' marks which are clearly visible. This church was built as a result of a national fundraising ordered by James I in 1607 because the existing church had been frequently devastated by Scots reivers/raiders, and to benefit the parishioners who were mainly rejecting Christ's teachings. (James also employed more direct methods of improving the morals of the area, hanging notable reivers from both sides of the Border and deporting the Grahams of the Esk valley en masse to Ireland.) Part of the sum was stolen and this delayed the construction of the new church.

A holy well is located on the edge of the mound. It is a well-built structure, with stone canopy and steps. It was still used for baptisms until the 1970s.

The current clergyman of the church is the Reverend Brett Murphy. 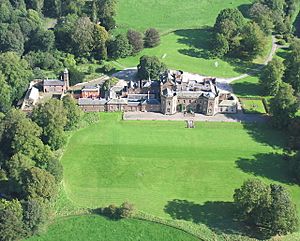 Netherby Hall, the historic home of the Graham family, is a Grade II* listed mansion. It stands upon the site of the Roman fort of Castra Exploratorum. Its nucleus is a 15th-century pele tower, extended or altered in 1639 for Sir Richard Graham and enclosed by extensive later additions to the house (in the late 18th century), with further extensions taking place in 1833 for Sir James Graham l by William Burn. The original pele tower is thought to have been built with stone from the fort and the remains of the fort and its vicus noted by Tudor antiquarians have been obliterated by the later extensions of the Hall

In October 1592 the Scottish rebel Earl of Bothwell, his wife Margaret Douglas, and the Laird of Burleigh stayed at Netherby with Walter Graham and played cards and football.

The Netherby Estate, owned by the Graham family for 400 years, extends over a large area of the parish along the Scottish border. A Gothick folly known as the Coop House was probably built about 1772 as an adornment to the estate. It is now leased by the Landmark Trust, and has been restored.

All content from Kiddle encyclopedia articles (including the article images and facts) can be freely used under Attribution-ShareAlike license, unless stated otherwise. Cite this article:
Arthuret Facts for Kids. Kiddle Encyclopedia.