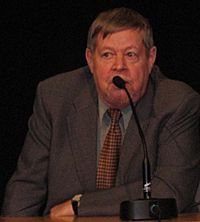 Arto Tapio Paasilinna (20 April 1942 – 15 October 2018) was a Finnish writer. He was a journalist turned comic novelist. He was one of the most successful novelists of Finland. He won a broad readership outside of Finland. He was born in Kittilä, Finland.

Paasilinna was known for his 1975 novel The Year of the Hare (Jäniksen vuosi), a best-seller in France and Finland. His brother is former MEP Reino Paasilinna.

Paasilinna died on 15 October 2018 in Espoo from complications of a stroke, aged 76.

All content from Kiddle encyclopedia articles (including the article images and facts) can be freely used under Attribution-ShareAlike license, unless stated otherwise. Cite this article:
Arto Paasilinna Facts for Kids. Kiddle Encyclopedia.