The Arts Club Theatre Company is a Canadian professional theatre company in Vancouver, British Columbia, founded in 1958. It is the largest urban not-for-profit theatre company in the country and the largest in Western Canada, with productions taking place at the 650-seat Stanley Industrial Alliance Stage, the 440-seat Granville Island Stage, the 250-seat Goldcorp Stage at the BMO Theatre Centre, and on tour around the province. The company celebrated its 50th season in 2014 and produced its 600th production in 2017.

Major themes from this company are new Canadian works, comedies, musicals, drama, and revues, with an emphasis on developing local and Canadian talent. In addition to theatre presentations, the company offers educational programs and special events. 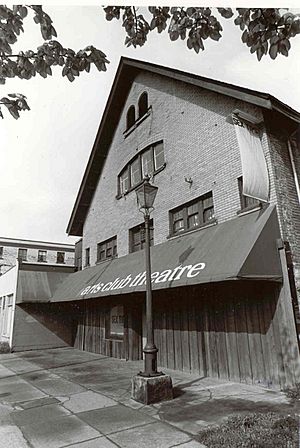 The Arts Club was founded in 1958 originally as a private club for artists, musicians, and actors. In January 1964, Yvonne Firkins, a founding member of the B.C. Drama Association and B.C.'s "First Lady of the Theatre," renamed the club the Arts Club Theatre Company and established a new theatre in a converted gospel hall on Seymour Street in Downtown Vancouver. The first production was Moss Hart's Light Up the Sky. When Bill Millerd took over the company in 1972, it was producing four productions per year, with an annual budget of $150,000, and an audience of 29,000 patrons per year.

Competing with the much larger, Canada Council-created Vancouver Playhouse Theatre Company, the Arts Club became known for programming gritty new plays like David Freeman's Creeps, David Fennario's On the Job, and premieres of Michel Tremblay's plays in translation, as well as Shakespeare plays in the larger Malkin Bowl in Stanley Park. Additionally, the long running Jacques Brel is Alive and Well and Living in Paris cemented the Arts Club's identity in its early years.

Just seven years into Millerd's time at the company, the Arts Club expanded to include performances at the 450-seat Granville Island Stage on Granville Island in 1979. Across the street, the smaller 193-seat Revue Stage in 1983.

The 1990s were a time of major transition for the company. In 1991, the Seymour Street Theatre was closed for demolition and is now the site of the Vancouver International Film Centre. Six years later, in 1997, the Revue Stage was leased to the Vancouver TheatreSports League for 13 years, before re-opening as an Arts Club stage in 2010.

In 1998, the Arts Club took over operations at the 650-seat Stanley Theatre (renamed the Stanley Industrial Alliance Stage in 2005), a former movie theater, located on Granville Street, a high traffic area of Vancouver. Now considered the company's main venue, it allowed the Arts Club to produce larger musicals like Les Miserables, Mary Poppins, Beauty and the Beast and Billy Elliot. The purchase and renovation of the new theatre cost nearly $9 million, almost three times the company's annual operating budget at the time. However, in the first season at the Stanley, the company's revenues nearly doubled, taking in more than the rival Vancouver Playhouse for the first time. The following year, company revenue went over $8 million and has not dropped below that point since.

In 2015, the Arts Club closed the Revue Stage and moved all programming to the 250-seat Goldcorp Stage at the BMO Theatre Centre in Olympic Village. A shared space with Bard on the Beach, the BMO Theatre Centre has four large rehearsal studios, wardrobe facilities for both companies, offices, and a state-of-the-art studio theatre space.

Since 1972, Bill Millerd is the artistic managing director and, as of 2017, is the longest-serving artistic director of a theatre company in Canada. During his time with the company, Millerd has expanded its operations to include year-round programming and regional and national tours. Millerd oversaw the construction of the Granville Island Stage, the Revue Stage, the reopening of the historic Stanley Theatre, and the BMO Theatre Centre. During his tenure, over 600 plays were produced, over 100 of which Millerd has directed himself. Millerd is a governor of the National Theatre School of Canada, has received both a Jessie Richardson Theatre Award for Career Achievement and the Mayor's Arts Award, and is a member of the Order of Canada. He has been awarded an Alumni Award of Distinction and an honorary Doctor of Letters degree from UBC, and was presented with a Lifetime Achievement Award from Tourism Vancouver. On February 20, 2017, Millerd announced his plans to retire at the end of the 2017/2018 season.

All content from Kiddle encyclopedia articles (including the article images and facts) can be freely used under Attribution-ShareAlike license, unless stated otherwise. Cite this article:
Arts Club Theatre Company Facts for Kids. Kiddle Encyclopedia.