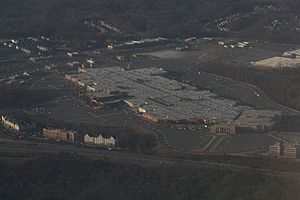 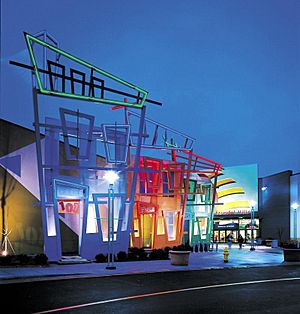 The Rowhouse Entry No. 1 at night 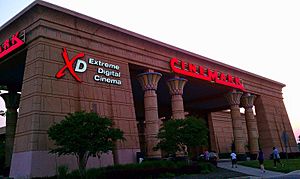 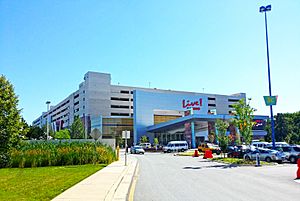 Arundel Mills is a shopping mall located in unincorporated Anne Arundel County, Maryland (with a Hanover mailing address). It is 59.3% owned by Simon Property Group, who manages the mall. With its 1,930,820 sq ft (179,379 m2) GLA, it is the largest mall in the state of Maryland. Developed by The Mills Corporation, the mall is located at the intersection of Maryland Route 100 and the Baltimore-Washington Parkway (Maryland Route 295) in northwestern Anne Arundel County (hence the name "Arundel" Mills). The anchor stores are Cinemark Theatres, Books-A-Million, The Children's Place, TJ Maxx, Burlington, Off Broadway Shoe Warehouse, Sun and Ski Sports, Old Navy, Bass Pro Shops, Saks Fifth Avenue, Ulta Beauty, Dave & Buster's, and Yard House.

Arundel Mills opened in November 2000 and, as of July 21, 2007, had over 225 stores. It is the first enclosed mall to feature a Medieval Times dinner theater. In addition to 17 large anchor stores, Arundel Mills features a Dave & Buster's, the Live! Casino & Hotel, and an Egyptian-themed 24-screen megaplex theater. The cinema was the only outlet of its Muvico Theaters chain in the state of Maryland before being sold to Cinemark in March 2009.

The mall's interior layout features a "racetrack" design and, more noticeably, the outline of a boat. Sponsorships for five sections or "neighborhoods" of the mall were previously held by Coca-Cola, Comcast, Discover Card, The Baltimore Sun, and Toyota.

Arundel Mills has 5 distinct neighborhoods with anchors and at least one mall entry. The Neighborhoods are designed after Maryland's culture.

In 2015, prior to an audit, Johnny Rockets managers were caught hiding expired food behind the Cinemark Egyptian 24. En lieu of this, all managers on staff were fired and the location underwent rigorous remodeling over the course of seven months. In June 2016, Johnny Rockets re-opened with an updated exterior, new logo, and all-new management.

Since the mall is located in a suburban area of Baltimore, there are many suburban neighborhoods around the area.

After Maryland voters approved slot machine gambling in Maryland in 2008, The Cordish Company planned a slots parlor next to the mall. The proposal for slots at Arundel Mills was on the ballot as a referendum in the November 2010 elections; the referendum passed, and construction began on the casino shortly afterward, with the grand opening of its first phase held on June 6, 2012, at 10 pm. Since full completion in September 2012, Maryland Live! has about 380,000 sq. ft. of floor space and 4,750 gaming slots. Maryland Live! is a free-standing facility, separated from Arundel Mills by the inner mall ring road. Although not directly connected to the mall, the casino is within walking distance of the food court entrance. Maryland Live! includes a 5,000-space parking structure at Arundel Mills with a "smart park" green-and-red-light space availability feature, such as the system used at nearby BWI Airport. Parking is available free of charge during all mall hours for Arundel Mills shoppers.

Maryland Live! includes several dining options, including Bobby's Burger Palace; The Cheesecake Factory; and a Prime Rib steakhouse. The project was to feature the world-famous Baltimore-based Obrycki's Crab House and Seafood Restaurant; however, the restaurant announced in November 2011 that it would not be opening a location there. Instead, Phillips Seafood will open a location at the site. Maryland Live! also has a live music venue operated by Annapolis-based Rams Head. Rams Head Live! includes fixed seating for approximately 300 in a cabaret-style design with several stepped viewing levels of the stage.

All content from Kiddle encyclopedia articles (including the article images and facts) can be freely used under Attribution-ShareAlike license, unless stated otherwise. Cite this article:
Arundel Mills Facts for Kids. Kiddle Encyclopedia.