Kids Encyclopedia Facts
This page is about the medieval-themed dinner theater. For the historical time period, see Middle Ages.

There are ten locations: the nine in the United States are built as replica 11th-century castles; the tenth, in Toronto, Ontario, Canada, is located inside the CNE Government Building. Shows are performed by a cast of about 75 actors and 20 horses in each location.

The first Medieval Times location opened in Orlando, Florida on December 20, 1983. In 1989, this location was expanded with a unique medieval village not offered at other locations.

The second location opened in Buena Park, California in 1986. By 1992, the chain had five locations. In 1993, the sixth location opened at Exhibition Place in Toronto, Ontario, Canada. The Toronto location is the company's sole international location and is housed in the Government Building, a Beaux-Arts structure formerly used for the Canadian National Exhibition, as opposed to an 11th-century castle replica. A seventh location opened in 1995 in Myrtle Beach, South Carolina. The eighth castle opened in 2003 at the Arundel Mills Mall in the Baltimore suburb of Hanover.

In April 1997, the company's owners sought bankruptcy protection after losing a court battle to the IRS that required the Buena Park location to pay $7.5 million and the Orlando location to pay $2.5 million in back taxes. According to the IRS, Medieval Times improperly deducted royalties, loan interest, and management fees in the 1987 and 1989 tax years. When asked why the company was filing for bankruptcy the company's bankruptcy lawyer, Alan Friedman, said, "one of the primary reasons for filing was to prevent the IRS from beginning to seize any assets."

The company emerged from bankruptcy, allowing all of its existing locations to continue operating and later opening two additional Medieval Times locations by 2006. The tenth, and most recent, castle opened in Scottsdale, Arizona in 2019.

The chain was featured in the 1996 film The Cable Guy, and the 2004 feature film Garden State. It has been featured in episodes of TV shows such as Friends, Cake Boss, Hell's Kitchen, The Celebrity Apprentice, and Close Enough.

The shows change about every six years. A new show premiered in late 2017, and for the first time, the lead role was filled by a queen rather than a king. 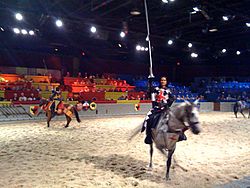 The introduction of the knights, pictured in 2008.

Guests are served a four-course meal timed with the presentation of the tournament. The standard offering is garlic bread and tomato bisque soup, a half rotisserie chicken, sides of herb-roasted potato and buttered sweetcorn, and a castle dessert. Vegan and allergy-friendly options are available.

The tournament opens with a light show and introduction of the six knights of the realm and their counties, represented by their colors throughout the castle. Also featured are choreographed equestrian, falconry, and character skills. A story-line ensues featuring the first female ruler, Doña Maria Isabella, attended by knights, squires, serfs, and wenches on parade and in competition. Knights on horseback compete at games, including catching rings on a lance, flag passing, and javelin tossing. Horseback jousts and fights have large nets to protect the audience from the wooden splinters from the lances and flying weapons. The winner is honored as "Champion" and "Defender of the Realm" and chooses a lady from the audience to be the "Queen of Love and Beauty." 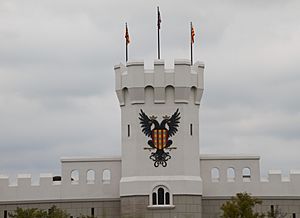 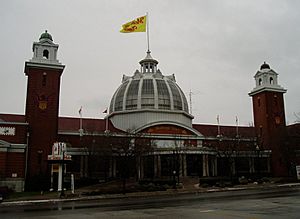 All content from Kiddle encyclopedia articles (including the article images and facts) can be freely used under Attribution-ShareAlike license, unless stated otherwise. Cite this article:
Medieval Times Facts for Kids. Kiddle Encyclopedia.