Asaphodes ida is a species of moth in the family Geometridae. It is endemic to New Zealand. This moth can be found in upland or alpine habitat in Canterbury and Otago. Although not classified under the New Zealand Threat Classification system this species is regarded as rare.

This species was described by Charles E. Clarke in 1926 as Xanthorhoe ida using material collected by George Howes in February at Eweburn Stream, Mount Ida in Canterbury. George Hudson discussed and illustrated this species as Xanthorhoe ida in 1928. In 1987 Robin C. Craw, after considering the genital structure of this species, proposed assigning this species to the genus Asaphodes. In 1988 John S. Dugdale agreed with this proposal. The holotype specimen is held at the Auckland War Memorial Museum.

Clarke described the species as follows: 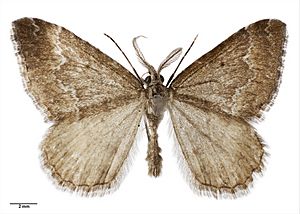 This species is endemic to New Zealand. It is found in the Ida Range in Canterbury as well as the Hawkdun Range in Central Otago. This moth is regarded as being rare.

A. ida is on the wing in February.

A. ida frequents upland or alpine wetland habitat at between 800 and 1,100 meters in altitude.

All content from Kiddle encyclopedia articles (including the article images and facts) can be freely used under Attribution-ShareAlike license, unless stated otherwise. Cite this article:
Asaphodes ida Facts for Kids. Kiddle Encyclopedia.