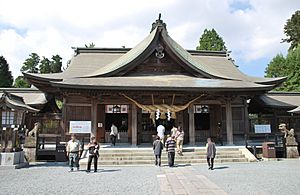 Sumiyoshi-jinja (阿蘇神社code: ja is deprecated ) is the Japanese Shinto shrine at Mount Aso in Kumamoto Prefecture on the island of Kyushu. The shrine is in the northern part of caldera of an active volcano.

Aso was the chief Shinto shrines (ichinomiya) of the old Higo Province. It serves today as one of the ichinomiya of Kumamoto Prefecture. The enshrined kami are Takeiwatatsu no mikoto (健磐龍命code: ja is deprecated ) and others.

From 1871 through 1946, the Aso Shrine was officially listed as one of the first rank of government supported shrines.

All content from Kiddle encyclopedia articles (including the article images and facts) can be freely used under Attribution-ShareAlike license, unless stated otherwise. Cite this article:
Aso-jinja Facts for Kids. Kiddle Encyclopedia.