The Asolo Repertory Theatre or Asolo Rep (AKA: Asolo Theatre Company, Inc.) is a professional theater in Sarasota, Florida. It is the largest Equity theatre in Florida, and the largest Repertory theatre in the Southeastern United States. Asolo Rep is a resident regional theatre company which also invites in guest artists. It works in conjunction with Florida State University's MFA Acting program, the FSU/Asolo Conservatory for Actor Training. It is currently housed in the Florida State University Center for the Performing Arts, which is a multi-theater complex, located on the John and Mable Ringling Museum of Art property. The 2008–2009 season marked Asolo Rep's 50th anniversary.

History of the Historic Asolo Theatre 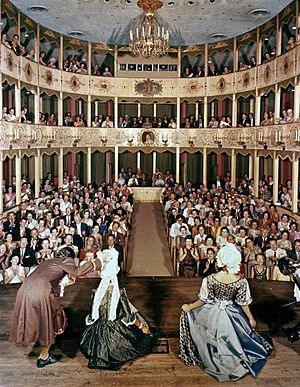 The original performance space for the Asolo Repertory Theatre was housed in a historic theatre that was initially located in Asolo, Italy just outside Venice. Commissioned in 1798 by Italian impresario Antonio Locatelli, the theatre stood in the former audience hall of the castle of Caterina Cornaro, the former Queen of Cyprus. The horse-shoe shaped theatre contains four tiers of boxes and was modeled after La Fenice. In the late 19th and early 20th centuries the building was the home theatre of the great Italian actress Eleonora Duse.

In 1930, the Asolo Theatre was dismantled and put into storage. In 1949 the museum director of the John and Mable Ringling Museum of Art learned of the theatre's existence and saw the theatre as an ideal acquisition for the museum. The State of Florida agreed and purchased the theatre which was crated and shipped to Sarasota, Florida. In 1952 the theatre was set up in a gallery in the Ringling museum. In the late 1950s it was decided that the theatre should be reconstructed so that modern theatre performances could be staged. The reconstructed theatre therefore incorporates the historic architecture into a building that is modern in design.

The Asolo Theatre opened its doors on January 10, 1958, with a production of Wolfgang Amadeus Mozart's Die Entführung aus dem Serail. Presented by the New York City Opera, the production was directed and conducted by Julius Rudel. The opera starred Robert Rounseville as Belmonte, Beverly Bower as Konstanze, Herbert Beattle as Osmin, and Jacquelynne Moody as Blonde.

The theatre has since been moved to another location on the Ringling grounds and is now known as The Historic Asolo Theatre. The Asolo Repertory Company still puts on a few productions there each year, but it is no longer its primary location. Most shows for the Rep Company are performed at the Mertz Theatre, which is housed in the Florida State University Center for the Performing Arts, which is across the street. In addition, the Rep Company collaborates with other theater companies in the South, such as Miami New Drama at the Colony Theatre.

History of the Mertz Theatre

The Harold E. and Esther M. Mertz Theatre was brought to America from Scotland, where it had existed as the Dunfermline Opera House. The Mertz Theatre was dedicated on January 27, 1990. The 2009–2010 season marked its twentieth anniversary, which was to be celebrated with a Scottish-themed event in January.

The Asolo has engaged a collection of talented artists throughout the years, including all those listed below.

All content from Kiddle encyclopedia articles (including the article images and facts) can be freely used under Attribution-ShareAlike license, unless stated otherwise. Cite this article:
Asolo Repertory Theatre Facts for Kids. Kiddle Encyclopedia.