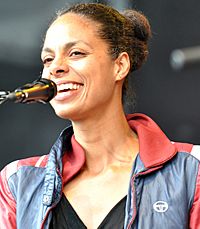 Astrid North (born Astrid Karina North Radmann; 24 August 1973 – 25 June 2019) was a German soul singer and songwriter. She was the singer of the German band Cultured Pearls [de]. She released five albums with them. She was also a guest singer of the band Soulounge [de] for which she published three albums. North was born in Berlin.

All content from Kiddle encyclopedia articles (including the article images and facts) can be freely used under Attribution-ShareAlike license, unless stated otherwise. Cite this article:
Astrid North Facts for Kids. Kiddle Encyclopedia.