Athenaeum of Philadelphia facts for kids 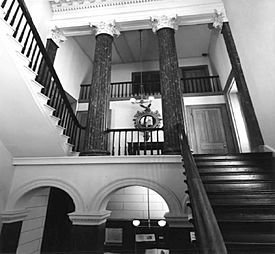 Staircase in the Athenaeum

The Athenaeum of Philadelphia, located at 219 S. 6th Street between St. James Place and Locust Street in the Society Hill neighborhood of Philadelphia, Pennsylvania, is a special collections library and museum founded in 1814 to collect materials "connected with the history and antiquities of America, and the useful arts, and generally to disseminate useful knowledge" for public benefit. The Athenaeum's collections include architecture and interior design history, particularly for the period 1800 to 1945. The institution focuses on the history of American architecture and building technology, and houses architectural archives of 180,000 drawings, over 350,000 photographs, and manuscript holdings of about 1,000 American architects.

Since 1950 the Athenaeum has sponsored the annual Athenaeum Literary Award for works of fiction and non-fiction.

The building was designed in 1845 by architect John Notman in the Italianate style, and was one of the first buildings in the city to be built of brownstone, although it was originally planned to be faced in marble – brownstone was used because it was cheaper. Notman's design was influenced by the work of the English architect Charles Barry.

The building was declared a National Historic Landmark in 1976, as one of the nation's first examples of a building with a palazzo-style facade, and for its historic importance as an educational institution. Today, it is operated as a museum furnished with American fine and decorative arts from the first half of the nineteenth century.

On the right of the athenaeum is the house of Richardson Dilworth, the Mayor of Philadelphia from 1956 to 1962.

The Athenaeum Literary Award is a literary award presented by Athenaeum of Philadelphia since 1950. It is awarded to authors who are "bona fide residents of Philadelphia or Pennsylvania living within a radius of 30 miles of City Hall". Eligible works are of general fiction or non-fiction; technical, scientific, and juvenile books are not included. The award was established in 1950 by Charles Wharton Stork (1881–1971), who was a board member of the Athenaeum from 1919 until 1968.

All content from Kiddle encyclopedia articles (including the article images and facts) can be freely used under Attribution-ShareAlike license, unless stated otherwise. Cite this article:
Athenaeum of Philadelphia Facts for Kids. Kiddle Encyclopedia.