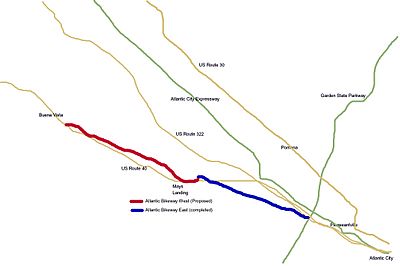 It occupies a 7.56-mile (12.17 km) abandoned rail corridor of the West Jersey and Atlantic Railroad later the Pennsylvania-Reading Seashore Lines in Atlantic County that extends from The Shore Mall in Egg Harbor Township near Garden State Parkway exit 36 to the Atlantic County Institute of Technology in Hamilton Township.

Plans call for extending the bikeway to the Cumberland County Line, this section is referred to as bikeway west, and would run between Gaskill Park in Mays Landing and an area near the Buena Vista Campground near Routes 54 and 40 in Buena Vista.

It has been proposed to link the Atlantic County Bikeway with other south Jersey abandoned rail lines to extend the trail network all the way to Vineland.

All content from Kiddle encyclopedia articles (including the article images and facts) can be freely used under Attribution-ShareAlike license, unless stated otherwise. Cite this article:
Atlantic County Bikeway Facts for Kids. Kiddle Encyclopedia.