Tests in the 1920s estimated that the Atlantic sailfish was capable of short sprints of up to 111 kilometres per hour; however, more conservative estimates of 37 to 55 kilometres per hour are more widely accepted. More recent studies even suggest sailfish do not exceed swimming speeds of 36 km/h (22 mph).

Atlantic sailfish hunt schooling fish, such as sardines, anchovies and mackerel although they also feed on crustaceans and cephalopods. 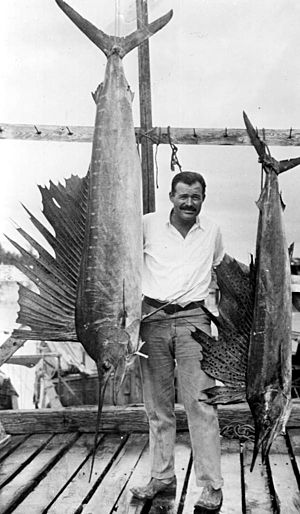 Ernest Hemingway in Key West, Florida, USA, in the 1940s, with an Atlantic sailfish he had caught

Studies found that sailfish hunting schools of sardines rely heavily upon stealth and quick slashing or tapping with the rostrum in order to temporarily immobilize prey and make capturing small prey easier. The bill has been hypothesized to increase the hydrodynamic qualities of the fish and even to ward off predators. However, it has been well documented that the sailfish use the bill for hunting.

Some authorities only recognise a single species of sailfish, Istiophorus platypterus, with I. albicans being treated as a synonym for I. platyperus.

All content from Kiddle encyclopedia articles (including the article images and facts) can be freely used under Attribution-ShareAlike license, unless stated otherwise. Cite this article:
Atlantic sailfish Facts for Kids. Kiddle Encyclopedia.