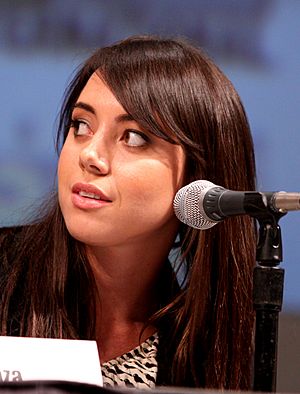 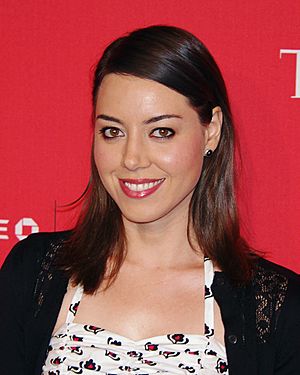 Aubrey Plaza (born 26 June 1984, Wilmington, Delaware) is an American actress and comedian. She performs in movies and television. She starred as April Ludgate in the NBC television showParks and Recreation. She acted as Claire in Monsters University and as Darius in Safety not Guaranteed.

Plaza will star as Karen Barclay in the 2019 horror movie Child's Play.

Plaza acts the speaking voice of Grumpy Cat in the Lifetime TV network movie Grumpy Cat's Worst Christmas Ever. It was first shown on November 29, 2014.

All content from Kiddle encyclopedia articles (including the article images and facts) can be freely used under Attribution-ShareAlike license, unless stated otherwise. Cite this article:
Aubrey Plaza Facts for Kids. Kiddle Encyclopedia.