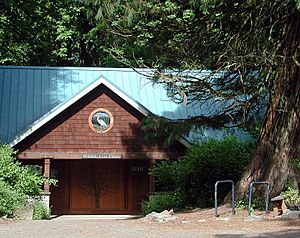 Wildlife Care Center of the Audubon Society of Portland

The Audubon Society of Portland is a non-profit environmental organization dedicated to wildlife conservancy in Portland, Oregon, United States.

Founded in 1902 and incorporated in 1909, it is one of the oldest such organizations in the world. It is named in honor of John James Audubon, an ornithologist and naturalist who painted, cataloged, and described birds of North America in Birds of America published in sections between 1827 and 1838.

The society owns 150 acres (0.61 km2) of woodland adjacent to Forest Park, managed as a nature sanctuary and features indigenous vegetation and fauna, including a small stand of old growth timber. The sanctuary is open to the public for free. Much of the sanctuary surrounds Balch Creek near its headwaters and contains more than 4.5 miles (7.2 km) of hiking trails which connect to Forest Park's extensive trail system.

Within the sanctuary is a nature center containing classrooms, retail store, wildlife taxidermy exhibits, auditorium, and a wildlife care center. The care center treats injured and orphaned native wildlife utilizing professional staff and more than one hundred volunteers. More than 3,500 animals are brought to the center each year. 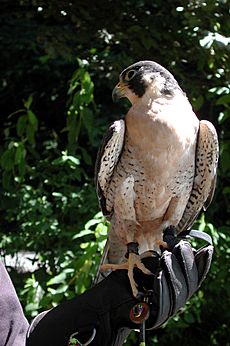 A peregrine falcon named Finnegan is among the educational birds at the sanctuary.

Displays of live educational birds are adjacent to the care center. Five birds are on display, having injuries or imprinting that prevent them from successful reintroduction to the wild. Currently there is a Great Horned Owl, male and female American Kestrels, and a Turkey Vulture. There is also a Western Painted Turtle that was rescued from a pet store and now lives in a tank inside the Care Center.

In 2007, there were 21,615 hours volunteered to the society's efforts, including visitor reception, trail maintenance, tour guides, nature store attendant, clerical, conservation activists, and wildlife caretakers. It is one of the most highly rated charities of its kind, based on operational and organizational efficiency.

The society is frequently consulted for expertise related to practical wildlife questions and wildlife management practices.

All content from Kiddle encyclopedia articles (including the article images and facts) can be freely used under Attribution-ShareAlike license, unless stated otherwise. Cite this article:
Audubon Society of Portland Facts for Kids. Kiddle Encyclopedia.