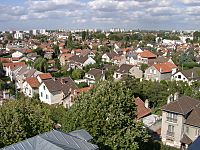 Aulnay-sous-Bois is a town and commune in the northeast suburb of Paris, France. It is in the Île-de-France region and the Seine-Saint-Denis department. About 80,000 people lived there in 1999. The people who live there are called the Aulnaysiens.

In October and November 2005, it was badly affected by riots.

All content from Kiddle encyclopedia articles (including the article images and facts) can be freely used under Attribution-ShareAlike license, unless stated otherwise. Cite this article:
Aulnay-sous-Bois Facts for Kids. Kiddle Encyclopedia.