Aunuʻu is a small volcanic island off the southeastern shore of Tutuila in [[Saʻole County]], American Samoa. It has a land area of 374.83 acres (0.59 sq mi; 1.52 km2), and a 2010 census population of 436 persons. Politically, it is a part of the Eastern District, one of the two primary political divisions of American Samoa.

[[Aunuʻu Crater]] contains the freshwater Faimulivai Marsh, the largest such wetland in American Samoa. It was formed from the drainage of the low-lying crater. It is part of a protected National Natural Landmark on Aunuʻu that was designated in 1972. The Pacific black duck was seen in the marsh in 1976, but it may now be extinct in the region; another significant local bird is the purple swamphen. This marsh is the only place in American Samoa where the Chinese water chestnut grows.[1]

Since the 1960s, the Aunuʻu people’s main economic activity has been growing taro and producing faausi. 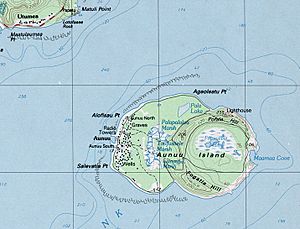 Aunuʻu is a car-free island, but motorboats, operating nonstop, shuttle people to its small boat harbor at Auasi. A lake, called “Red Lake,” is nestled in the island’s sprawling crater. Hiking the island is difficult, as it is densely forested and full of thick bushes, with steep cliffs along the south coast. The island has a stretch of red quicksand at Pala Lake, fairly close to the village, and taro swamps behind the village. There is a cove, called “Maʻamaʻa Cove,” on the east side of the island.

The island is less than 1 sq. mi. in area, and around half of that area is a cultivated plain on which Aunuʻu’s villages are located. There are several beaches consisting of coral rubble and sand, and sea cliffs. The eastern half of Aunuʻu is rimmed by a geologically recent volcanic cone. The highest point on the crater rim is 310 feet above sea level. Within the crater is the Faʻimulivai Marsh, which contains a freshwater pond. The crater is one of the few places in American Samoa where evidence of the more recent episodes of volcanism can be observed. The eruptions at Aunuʻu occurred at approximately the same time as the volcanism at Leala Shoreline in Taputimu, while the eruptions that formed Rainmaker Mountain, Matafao Peak, and the ridges of [[Vaiʻava Strait]] are much older. Aunuʻu Island has the only quicksand area in American Samoa, and also the territory's only lakes: Pala Lake is just north of the village, and Red Lake is inside the crater. Maʻamaʻa Cove is on the far eastern edge of the crater.

Aunuʻu has a population of around fifty gray ducks (anas superciliosa), locally known as toloa. Pairs of these birds have also been sighted in Futiga, Nuʻuuli, Alao, and Leone, however, they may not be based on those islands; they may belong to the population that lives on Aunuʻu.

All content from Kiddle encyclopedia articles (including the article images and facts) can be freely used under Attribution-ShareAlike license, unless stated otherwise. Cite this article:
Aunuʻu Facts for Kids. Kiddle Encyclopedia.