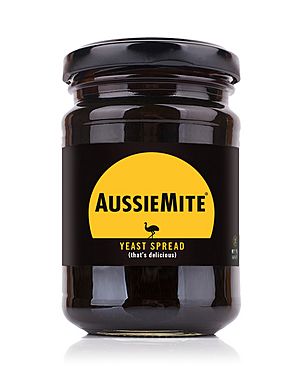 AussieMite is an Australian savoury food spread made from vegetable protein and yeast extract with various vitamins and minerals such as B vitamins and Iron. It was founded by Roger Ramsey in 2001. The taste of the product is slightly salty and is used for toast, sandwiches, crumpets and cracker biscuits, as well as a filling for pastry products.

AussieMite was founded by Roger Ramsey an Agricultural Pilot, Inventor and the founder of Australian company All Natural Foods. The product was launched into Australian supermarkets in 2001 and in 2011 AussieMite was launched into the United Kingdom, The United States of America, United Arab Emirates and South East Asia. Bega Cheese bought the Vegemite brand back for $460 Million In 2016. It is a registered trademark of Australia, the United Kingdom, European Union, United States of America, United Arab Emirates, Japan, South East Asia and Asia.

All content from Kiddle encyclopedia articles (including the article images and facts) can be freely used under Attribution-ShareAlike license, unless stated otherwise. Cite this article:
AussieMite Facts for Kids. Kiddle Encyclopedia.