The Australian Armour and Artillery Museum is a privately owned museum dedicated to tanks, armoured vehicles and artillery from the Second World War and post war periods. It was officially opened in 2014, in Cairns, Queensland, Australia.

The museum houses vehicles from a number of overseas manufacturers, including vehicles from Russia, German, Japan, the UK, the US and Czechoslovakia. 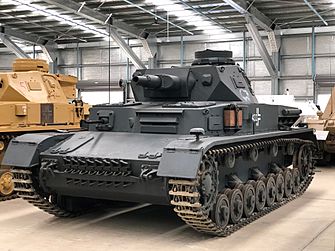 The museum houses artillery dating back to World War I and vehicles from World War II and the post war period. All up the collection owns more than 100 vehicles, with more than 190 exhibits on display. A number are also in various stages of restoration and transit. The collection features a range of armoured vehicles including German, US, Australian, British and Russian examples. 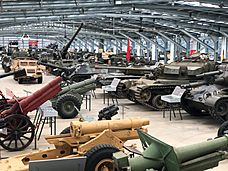 Inside The Australian Armour & Artillery Museum

Vehicles not on display

Additionally, there are a number of vehicles owned by the museum, but not currently on display. Mostly these are still being prepared in workshops, either on site or overseas, or they are in transit to the Museum. Some of these include a Panther A, Cromwell Medium Tank, ISU152 and close to another 25 additional planned exhibits 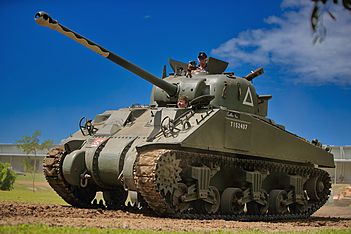 Each year to celebrate the Museums birthday, the Museum hosts a two day event called AusArmourfest. AusArmourfest gives people the opportunity to go for rides in some of the operational vehicles. In past years some of the vehicles have included the Hetzer, T72, Panzer IV G, Leopard, Kettenkrad, Sabre and many more.

The museum hosts two rare Australian Cruiser tanks (two of six left in the world), an AC1 Sentinel and a hybrid AC1 with an AC3 turret, presented as an AC4. The AC1 Sentinel was purchased and given to the museum by Wargaming Inc, producer of the World of Tanks tank game. The Sentinel was in the United States at the Littlefield Collection when that collection sold off many of its vehicles, and Wargaming Inc desired to purchase it and return it to its original home. As part of the purchase, it allowed access to the tank by Wargaming, so that they could study it and replicate it accurately for their game.

The Museum site also includes a 50-metre shooting gallery and a repair/restoration workshop where the vehicles which are in a state of deterioration can be restored. The workshop has a number of staff and can modify and build vehicles. As of 2015, the site has expanded to house more vehicles.

In 2016, the museum workshop undertook construction of a Tiger 1 replica. This utilised a highly accurate, partially constructed Tiger 1 that was originally constructed for the movie Fury, which in itself was an accurate replica of Tiger 131. The reconstruction utilised that upper portion of the Tiger, and also referenced original tiger parts the museum had purchased to make the whole tank. The bottom chassis was strengthened to be able to run, the first time the museum had produced its own tank from scratch. The Tiger reproduction uses a Scania truck engine. The running gear is T55 (Track,support arms and torsion bars) M110 Road wheels and the drive/ steering component is from a T62, but it is outwardly a running, almost completely accurate Tiger 1, except that the front drive sprocket (which due to the T62 T/case sits 200mm too high) and T55 Track. It was completed in November 2016, and is the only reproduction tank of this scale to be completed in Australia.

All content from Kiddle encyclopedia articles (including the article images and facts) can be freely used under Attribution-ShareAlike license, unless stated otherwise. Cite this article:
Australian Armour and Artillery Museum Facts for Kids. Kiddle Encyclopedia.