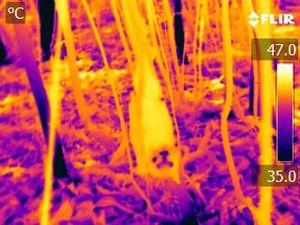 In the last two decades tens of thousands of Australian flying foxes have died during extreme heat events. Flying fox die-offs feature arguably among the most dramatic mass mortality events witnessed in nature, but they can be indicators of heat stress in more cryptic fauna where impacts are more difficult to assess. The die-offs are important additional threats to Australian flying-foxes and the ecosystem services they provide, and highlight the complex implications of climate change for behaviour, demography, and species survival.

Mortality is especially high among dependent young and lactating females, but any demographic category can be affected.

Observations in flying fox colonies during extreme heat events have revealed that flying foxes go through a predictable sequence of thermoregulatory behaviours with rising temperatures:

Beyond this, individuals tend to be found near the bases of trees where they form piles of lethargic and dead bats.

All content from Kiddle encyclopedia articles (including the article images and facts) can be freely used under Attribution-ShareAlike license, unless stated otherwise. Cite this article:
Australian flying fox die-offs Facts for Kids. Kiddle Encyclopedia.