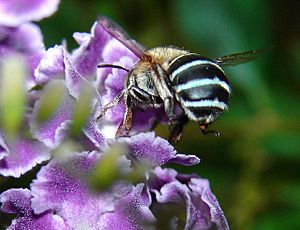 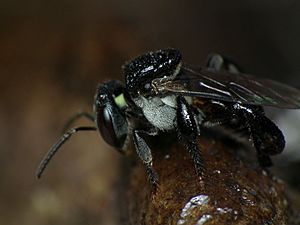 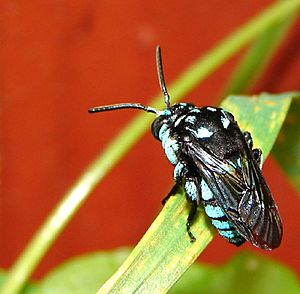 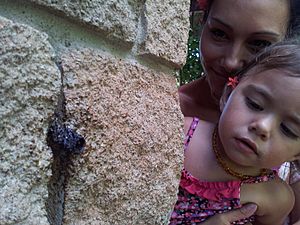 The entry and exit spout of a native bee hive forming in the brickwork of a house in Darwin, Australia 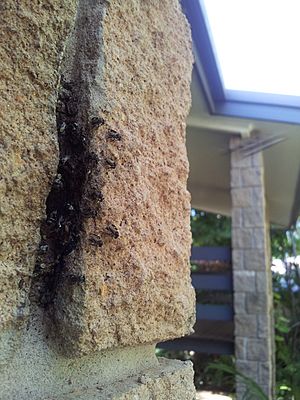 Native bees forming a hive in the brickwork of a house in Darwin, Australia

Australia has over 1,500 species of native bee. Bees collect pollen, from flowers, to feed their young. Wasps and flies do not do this, although they may be seen eating pollen, so identification is not always easy.

Sting or no sting, solitary vs social

Ten of the species, the social native bees Tetragonula and Austroplebeia have no sting.

Of the remainder, which live solitary lives, none are aggressive, and most cannot actually use their sting on humans because they are too small to do so. Larger examples of Australian native bee are capable of stinging if handled or squashed.

The stings of most Australian native species of bee will cause relatively minor discomfort to most people -- "not as painful as those of a bull ant or paper wasp and last only a few minutes". However, they may sting more than once, and can cause an allergic reaction—increasing effect associated with repeated exposure to the antigen.

Social species of Australian native bees do produce honey, but not much, as they are relatively primitive bee species. In cool-climate areas of Australia, all the honey the bees produce is needed by the swarm to live through winter.

Collecting honey from Australian native bee nests can cause many of the bees to drown in spilt honey. The honey is tangy in comparison with commercial honey taken from the European Honey bee. The bees store their honey in "small resinous pots which look like bunches of grapes".

The different species of Australian native bee have different habits and preferences in gathering pollen, so different species are better pollinators of a given plant than other species. Research is currently underway into use of Amegilla ("blue-banded bees") for use in pollinating hydroponic tomatoes, while some hydroponic growers are petitioning for introduction to the Australian mainland of the European bumblebee, Bombus terrestris—the island continent Australia has a history of sensationally poor outcomes from introduced species, the most famous example being that of the cane toad Bufo marinus—so the question of use of native vs introduced bees for pollination in Australia is controversial.

All content from Kiddle encyclopedia articles (including the article images and facts) can be freely used under Attribution-ShareAlike license, unless stated otherwise. Cite this article:
Australian native bees Facts for Kids. Kiddle Encyclopedia.