Amegilla cingulata is a species of blue-banded bees that is native to Australia and occurs in many other regions. Currently, several scientific organizations are conducting research on how A. cingulata benefits agriculture through its distinctive "buzz pollination". These bees are very important for the production of food and contribute to at least 30% of crops in Australia.

A. cingulata was first described by Danish entomologist Johan Christian Fabricius in 1775. Its specific epithet cingulata is from the Latin word cingulum ("belt") referring to the bee's bands. The genus Amegilla contains over 250 additional species, but several are virtually indistinguishable from A. cingulata, so are commonly confused with it. 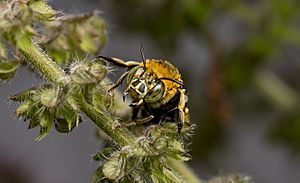 A. cingulata has a very striking appearance, similar to several other species of Amegilla. Unlike honey bees, it has pale opalescent blue stripes on its abdomen. The male can be distinguished by the number of complete bands, having five as opposed to the females' four. In size, A. cingulata can grow to 10–12 mm (0.39–0.47 in).

A. cingulata is native to Australia, but is also reported from Papua New Guinea, Indonesia, East Timor, Malaysia, and India, but the latter records may refer to misidentified specimens of similar species such as A. zonata. It appears to live in tropical and subtropical regions. The bees inhabit urban areas, woodlands, forests, and heath areas. The species is found all over Australia, excluding Tasmania.

A. cingulata can sting, but are not as aggressive as other bees. They appear to be more rapid in movement than other bees. The males cling to plant stems during the night. They are solitary creatures, with single females inhabiting burrows in the soft sandstone or clay, unlike social species such as honey bees, which live in large colonies. 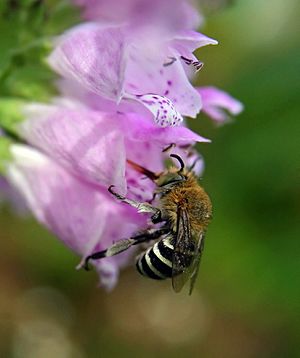 A. cingulata in Australia collects the majority of its nectar from blue flowers, although others investigated include mountain devil (Lambertia formosa) and grey spider flower (Grevillea buxifolia), as well as the introduced Abelia grandiflora and lavender (Lavandula species). They also feed on some nonblue flowers such as the white form of Salvia coccinea, tomato (Solanum lycopersicum), and eggplant (Solanum melongena) flowers, white flowers of Leea indica, and some members of the family Verbenaceae. The bees use a process that involves clinging onto flowers and vibrating powerfully, which increases the release of pollen. They only have a limited foraging range around 300 m from their nest, and females make at least nine foraging flights per day.

A. cingulata builds a solitary nest, but often close to other conspecifics. A. cingulata tend to nest in burrows in dried-up river banks, old clay homes, and mortar between bricks, but may also burrow in soft sandstone, and areas of this type of rock can become riddled with bee tunnels. Cells, at the end of tunnels, contain an egg with a pollen/nectar mixture for the larval food.

A. cingulata is preyed upon by many animals, including the cane toad, frogs, and birds. Its nests are parasitized by the neon cuckoo bee Thyreus nitidulus. Human activity, for example the clearing of river banks in the Caboolture River, may threaten nest sites of this bee.

All content from Kiddle encyclopedia articles (including the article images and facts) can be freely used under Attribution-ShareAlike license, unless stated otherwise. Cite this article:
Amegilla cingulata Facts for Kids. Kiddle Encyclopedia.