Austramathes purpurea is a species of moth in the family Noctuidae. It was first described by Arthur Gardiner Butler in 1879 from a specimen collected in Otago. It is endemic to New Zealand.

The larvae of this species are green with orange, black, yellow and pink markings.

The expansion of the wings is 1 1/2 inches. The forewings are rich, glossy reddish-brown with several scattered whitish scales; there is a distinct yellow mark on the costa at about one-fourth, forming the beginning of a broken transverse line; the orbicular is small, round and yellowish; the reniform is small, crescentic and yellowish, the space between the orbicular and the reniform is very dark blackish-brown; beyond the reniform there is a conspicuous white mark on the costa forming the beginning of a second broken transverse line; a third shaded line is situated near the termen. The hind-wings are pale brown with a dark spot in the middle, very conspicuous on the under surface.

A. purpurea is endemic to New Zealand, and found in both the North and the South Islands but has yet to be recorded at Stewart Island. Adults can be found on the wing during the months of September until April.

This species prefers native forest as its habitat. 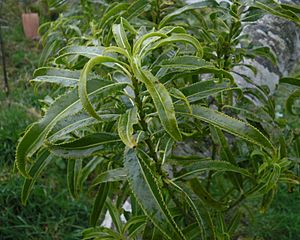 The caterpillars of A. purpurea feed on māhoe as well as the narrow-leaved māhoe.

Robert Hoare has hypothesized that light trapping may not be the most efficient technique for collection of this species.

All content from Kiddle encyclopedia articles (including the article images and facts) can be freely used under Attribution-ShareAlike license, unless stated otherwise. Cite this article:
Austramathes purpurea Facts for Kids. Kiddle Encyclopedia.