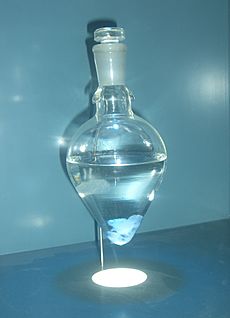 Avery, MacLeod and McCarty used strands of purified DNA such as this, precipitated from solutions of cell components, to perform bacterial transformations

The Avery–MacLeod–McCarty experiment was an experimental demonstration, reported in 1944 by Oswald Avery, Colin MacLeod, and Maclyn McCarty, that DNA is the substance that causes bacterial transformation.

This was the culmination of research in the 1930s and early 1940s at the Rockefeller Institute for Medical Research to purify and characterize the "transforming principle" responsible for the phenomenon first described in Griffith's experiment of 1928. In this early experiment dead Streptococcus pneumoniae of the virulent strain type III-S, when injected along with living but non-virulent type II-R pneumococci, resulted in a deadly infection of type III-S pneumococci.

This was an epoch-making experiment, but the three men did not get the Nobel Prize. The Nobel laureate Arne Tiselius said that Avery was the most deserving scientist not to receive the Nobel Prize for his work.

All content from Kiddle encyclopedia articles (including the article images and facts) can be freely used under Attribution-ShareAlike license, unless stated otherwise. Cite this article:
Avery–MacLeod–McCarty experiment Facts for Kids. Kiddle Encyclopedia.