The Azorina vidalii (Azores Bellflower) is the only species of the genus Azorina within the Campanulaceae, the bellflower family. This endemic species of the Azores is used as an ornamental plant in other countries besides the Azores. 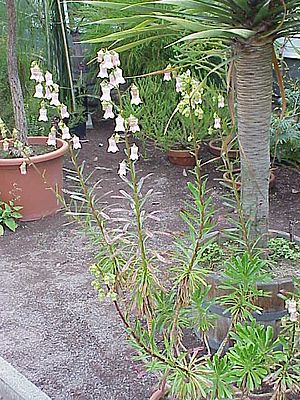 The Azores bellflower is an evergreen, perennial herbaceous plant that grows to a height of 80 to 150 centimetres. It produces branches at the base and these branches are woody in the lower part. The plant has dark green leaves.

The plant flowers from May to October. The inflorescence has many hanging, waxy, pale pink, bell-shaped flowers . The Azorina vidalii forma alba has, as the name suggests, white flowers.

The Azores bellflower is rare and usually grows in holes in cliffs near the sea, below the 50 metres of altitude. It is usually accompanied by the plant Salicornia, which also tolerate the salt in the wind coming from the sea. The plant is found in all the islands of the Azores archipelago, but not on the island of Graciosa.

All content from Kiddle encyclopedia articles (including the article images and facts) can be freely used under Attribution-ShareAlike license, unless stated otherwise. Cite this article:
Azorina vidalii Facts for Kids. Kiddle Encyclopedia.