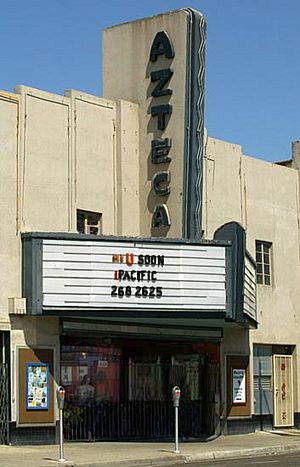 The Azteca Theater (Teatro Azteca) is an historic Art Deco theater in the Chinatown district of Fresno, California, built by Gustavo Acosta in 1948. The theater was the first Spanish language cinema in the San Joaquin Valley, serving a growing population of Mexican-Americans in California's Central Valley. It was listed on the National Register of Historic Places in 2017.

The theater was designed by Fresno firm, Johnson & Moore Consulting Engineers who designed the Biola Theater and Johnson was involved earlier in some of the facade work on the Warnors Theater in Fresno.

In 1956 Acosta leased the Azteca Theater to Arturo Tirado who is closely associated with the theater and entertainment in the Hispanic community into the 1980s when he retired. In 1961 Tirado was President of the Spanish Pictures Exhibitors Association representing 300 movie theaters in the United States. His father Romualdo Tirado was well known in California theater and a Cantinflas.

Besides popular films from the Mexican Cinema, singers and theatrical acts frequented the stage. The theater was a rallying point for César Chávez when he made his march from Delano to Sacramento.

The Azteca closed in the late 1980s and was partially reopening in 1999 with an art gallery and events.

All content from Kiddle encyclopedia articles (including the article images and facts) can be freely used under Attribution-ShareAlike license, unless stated otherwise. Cite this article:
Azteca Theater (Fresno, California) Facts for Kids. Kiddle Encyclopedia.