The BT Tower, formerly known as the Post Office Tower and the GPO Tower, is a landmark and telecommunications tower in Birmingham, England. It is the tallest structure in the city. Its post office code was YBMR.

The first microwave telecommunications relay in Birmingham, set up in 1949, utilised a metal tower on the roof of Telephone House, a 1930s building near to the eventual site of the BT Tower, and also on Lionel Street.

Construction of the BT Tower commenced in July 1963 and was completed in September 1965. The tower became operational in December 1966 and was officially opened by the Lord Mayor of Birmingham, Alderman James S. Meadows, on 5 October 1967. It was designed by the Ministry of Public Building and Works and M.H. Bristow was the senior architect. It has 26 storeys, housing technical areas and offices, and five levels of circular aerial galleries at the top. There is a roof-mounted crane. 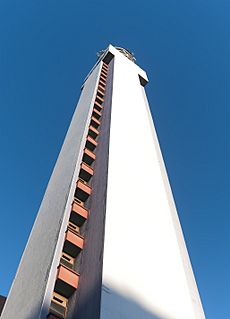 The original intention was to build a circular tower similar to the London one but without the public floors above the aerial galleries. At one time the Post Office wanted to increase the height from 500 feet (150 m), which had been agreed by the Ministry of Aviation, to 600 feet (180 m). This was refused in order to avoid non-standard procedures for aircraft approaching Birmingham Airport from the north-west. Cost over-runs on the London tower led to a review of the Birmingham design, and then it was decided to use a circular design of the 'Chilterns' type as used at Stokenchurch, Charwelton, Pye Green, Sutton Common, Heaton Park and Tinshill radio stations, but with the internal diameter increased from 32 feet (9.8 m) to 37 feet (11 m) to provide sufficient space on the equipment floors. The square design, as built, was proposed for aesthetic reasons by the Chief Architect of the Ministry of Public Building and Works.

The tower was designed to be stable in high winds. Channels at each corner funnel the wind to counteract the force of the wind swaying the structure. A stable platform is necessary so that the microwave dishes mounted on the side of the structure keep line of sight with the remote transmitter they are communicating with.

There were two steel rails on one wall on which a trolley was designed to run to carry the dishes up to the aerial galleries. The original horn dishes were too heavy for the roof mounted crane to lift and had to be stripped down, even in this state they were only just under the crane's maximum load capacity.

The ability to lift dishes was dependent on the weather and to complicate matters, the steel rails only went to the bottom of the first aerial gallery. To get the dishes higher a steel cable system was used that was mounted on poles. When the trolley reached the aerial gallery it had to be disconnected from the rails and swung out to attach to the cables.

In August 2003, the tower was painted an ultramarine blue to cover the existing light brown which had started to discolour. The balconies were painted a dark shade of blue. On 18 March 2004, local comedian Jasper Carrott switched on the night-time illuminations of the tower in response to Birmingham City Council's policy of encouraging the illumination of local landmarks.

The tower is home to a pair of peregrines, with a webcam installed in 2010.

On 5 February 2012 the last of the large analogue aerial dishes was removed following a migration to digital transmission. Around eighty smaller dishes remain.

In October 2018, at a meeting between the West Midlands Combined Authority (WMCA) and Birmingham City Council, plans were discussed for the renovation of the tower.

Following Birmingham's successful bid to host the 2022 Commonwealth Games, and as part of the city's master plan in preparation for the games, the WMCA and Birmingham City Council agreed that the tower (as the city's tallest structure) needed to be repurposed, with suggestions of a viewing platform or bar and restaurant. 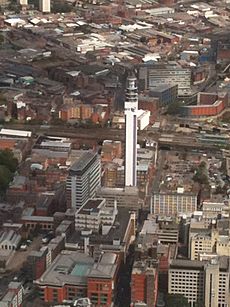 There are 24 equipment height floors (10 feet 6 inches or 3.20 metres in height), a Band Branching area (Floor 25) – the square section seen from outside, which is approximately double the normal floor height, followed by five aerial galleries.

All content from Kiddle encyclopedia articles (including the article images and facts) can be freely used under Attribution-ShareAlike license, unless stated otherwise. Cite this article:
BT Tower, Birmingham Facts for Kids. Kiddle Encyclopedia.