B chromosome facts for kids 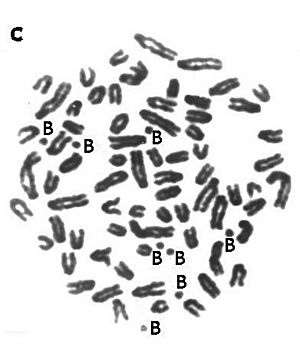 B chromosomes are chromosomes which are not needed for the life of a species. They are also called 'supernumerary' or 'accessory chromosomes'.

Most B chromosomes are mainly or entirely heterochromatic, and so do not code for anything. Some, such as the B chromosomes of maize, contain sizeable euchromatic segments, and therefore do code for some products.

It seems unlikely that supernumeraries would survive in a species unless there was some positive advantage. In a few cases this has been identified. For instance, the British grasshopper Myrmeleotettix maculatus has B chromosomes with a satellite DNA. They occur in warm, dry environments, and are scarce or absent in humid, cooler places.

It is thought that B chromosomes are parasitic elements like selfish DNA. Various scenarios have been suggested as to how they arose.

All content from Kiddle encyclopedia articles (including the article images and facts) can be freely used under Attribution-ShareAlike license, unless stated otherwise. Cite this article:
B chromosome Facts for Kids. Kiddle Encyclopedia.