"Baa, Baa, Black Sheep" is an English nursery rhyme, the earliest printed version of which dates from around 1744. The words have not changed very much in two-and-a-half centuries. It is sung to a variant of the 1761 French melody Ah! vous dirai-je, maman. 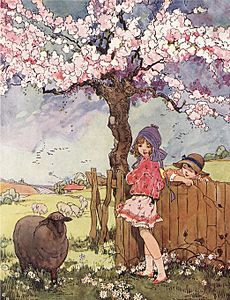 The rhyme as illustrated by Dorothy M. Wheeler

The rhyme is a single stanza in trochaic metre, which is common in nursery rhymes and relatively easy for younger children to master. The Roud Folk Song Index, which catalogues folk songs and their variations by number, classifies the song as 4439 and variations have been collected across Great Britain and North America.

The rhyme is usually sung to a variant of the 1761 French melody Ah! vous dirai-je, maman, which is also used for "Twinkle Twinkle Little Star" and the "Alphabet song". The words and melody were first published together by A. H. Rosewig in (Illustrated National) Nursery Songs and Games, published in Philadelphia in 1879.

The text was translated to Swedish by August Strindberg for Barnen i skogen (1872), a Swedish edition of Babes in the Wood. To this Swedish text a melody was written by Alice Tegnér and published in the songbook Sjung med oss, Mamma! (1892), where the black sheep is now a white lamb: Bä, bä, vita lamm, one of the most popular Swedish children's songs.

The phrase "yes sir, yes sir, three bags full sir" has been used to describe any obsequious or craven subordinate. It is attested from 1910, and originally was common in the British Royal Navy.

The rhyme has often been raised in literature and popular culture. Rudyard Kipling used the rhyme as the title of a semi-autobiographical short story he wrote in 1888. The name Black Sheep Squadron was used for the Marine Attack Squadron 214 of the United States Marine Corps from 1942 and the title Baa Baa Black Sheep was used for a book by its leader Colonel Gregory "Pappy" Boyington and for a TV series (later syndicated as Black Sheep Squadron) that aired on NBC from 1976 until 1978. In 1951, together with "In the Mood", "Baa Baa Black Sheep" was the first song ever to be digitally saved and played on a computer.

All content from Kiddle encyclopedia articles (including the article images and facts) can be freely used under Attribution-ShareAlike license, unless stated otherwise. Cite this article:
Baa, Baa, Black Sheep Facts for Kids. Kiddle Encyclopedia.