Babbacombe Model Village is a miniature village and railway located in Babbacombe in Torquay, Devon. 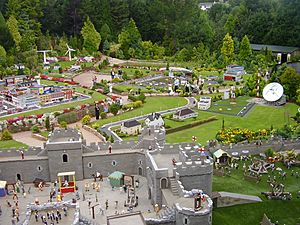 The site is set on approximately 4 acres (1.6 ha). There are over 400 models along with 1,000 ft (300 m) of model train track in the village. The model village is primarily one town, an entirely fictional one, but many buildings within them are based on UK prototypes and landmarks (including Stonehenge and the Shard).

The village also includes a model railway, castle and windmill.

Some of the popular models at the village include the burning house, Stonehenge, the Shard, the EastEnders indoor scene and the dragon castle.

The model village appeared in an episode of Holiday of My Lifetime in 2014 with Len Goodman and Matt Allwright. It also appeared on The One Show in the same year. In 2019, the model village was used as a filming location for Don’t Forget the Driver.

In summer months, the Babbacombe Model Village is open until 10.30pm, weeknights with the village illuminations switched on. The Shard in the centre of the village is also lit up.

All content from Kiddle encyclopedia articles (including the article images and facts) can be freely used under Attribution-ShareAlike license, unless stated otherwise. Cite this article:
Babbacombe Model Village Facts for Kids. Kiddle Encyclopedia.