Bacău is a county (judeţ) of Romania, in Moldavia. The capital of Bacău County is Bacău, with a population of about 130,000 people.

The West side of the county are mountains from the Eastern Carpathian group. Here, along the valleys of the Oituz River and Trotuș River there are two important links between Moldavia and Transylvania. To the East side, the heights decrease and the lowest point can be found on the Siret River valley which crosses the county from North to South in the middle. On the East side there is the Moldavian Plateau crossed by many small rivers.

The ethnic breakdown was as follows: 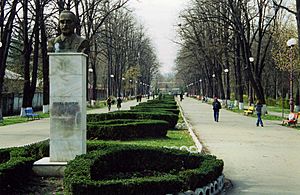 All content from Kiddle encyclopedia articles (including the article images and facts) can be freely used under Attribution-ShareAlike license, unless stated otherwise. Cite this article:
Bacău County Facts for Kids. Kiddle Encyclopedia.