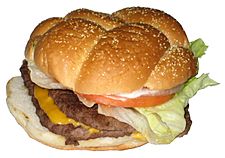 The Bacon Deluxe is a burger sandwich made by Wendy's restaurants. It is topped with four strips of smoked bacon. The double burger order has two beef patties, four strips of bacon, American cheese, ketchup and mayo. While the triple burger order has three beef patties, topped with four strips of bacon, American cheese, lettuce, tomato, onion and dill pickle with ketchup and mayo. The Bacon Deluxe was launched with an widespread media campaign and was priced at $3.99 for a single, $4.99 for a double and $5.99 for a triple. It is being launched alongside another Wendy's bacon sandwich: the Baconator.

All content from Kiddle encyclopedia articles (including the article images and facts) can be freely used under Attribution-ShareAlike license, unless stated otherwise. Cite this article:
Bacon Deluxe Facts for Kids. Kiddle Encyclopedia.