Bad Friedrichshall is a town in the district of Heilbronn in Baden-Württemberg in southern Germany. It is situated at the confluence of the Jagst and the Kocher into the Neckar, 10 kilometres (6 mi) north of Heilbronn. Bad Friedrichshall arose by the connection of Kochendorf and Jagstfeld in 1933, and is famous for its salt-mine.

Bad Friedrichshall is a town in the district of Heilbronn in Baden-Württemberg in southern Germany. It is situated at the confluence of the Jagst and the Kocher into the Neckar.

Neighbouring towns and villages of Bad Friedrichshall are (clockwise from the south): Neckarsulm, Untereisesheim, Bad Wimpfen, Offenau, Gundelsheim, Neudenau, Neuenstadt am Kocher and Oedheim, which all belong to the district of Heilbronn. It is 10 kilometres (6 mi) north of the city of Heilbronn Bad Friedrichshall has combined its administration with Oedheim and Offenau.

Bad Friedrichshall arose in 1933 by the combination of Kochendorf and Jagstfeld. Its name Friedrichshall is derived from the term Bad for a brine and salt-works in Jagstfeld, named after Frederick I of Württemberg in 1818. The term Hall is a common term in the area related to salt industry. 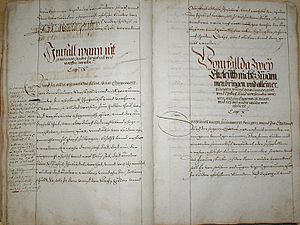 A consolidated estate, around which people settled and from which the village of Kochendorf arose, was first mentioned in 817, Situated at the confluence of the Kocher and the Neckar on a hill. St. Sebastian church probably already existed before 1100. Around 1200, Kochendorf was enclosed with a wall of bricks. In the 13th century there is first mention of a gentry of Kochendorf, dealing with ministerialis of the Staufers in Wimpfen. In the 15th and 16th century the gentry had three castles built. In 1672 the Freiherrs of Saint-André bought a third of the village, and built a new castle on one of the three former castle sites.

In 1762 The Ritterkanton Odenwald was able to buy the whole village from the former heirs, made Kochendorf their chancellery and carried on a knightly hotel, which no longer exists.

In 1806, Kochendorf became part of Württemberg as a free municipality. In 1899, salt-works of the Salzwerke Heilbronn AG were opened.

From the 16th century to the 19th century a large Jewish parish existed: around 1740 a synagogue was built, replaced by a new construction in 1806. Until 1854, the parish grew to 154 people and represented nearly 9% of the village population. However, migration and emigration in the following time decreased the parish enormously. In 1880, merely 71 Jewish inhabitants, and in 1925 only 7 Jews were left. The Jewish parish broke up before 1933 and sold its synagogue to the Protestant parish. Five of Kochendorfs last seven Jews were killed by Nazi persecution between 1940-43.

In 1933, Kochendorf combined with the neighbouring Jagstfeld into Bad Friedrichshall. Two years later, Hagenbach was incorporated.

In September 1944, the SS established a subcamp of the Natzweiler-Struthof KZ in Kochendorf.in this last phase of the third reich concentration camps were erected near factories, quarries or mines using inmates as slave labor under teh motto "Vernichtung durch Arbeit" (Destruction through work) Companies had to apply for a building modification at the Organisation Todt.

Various military contractors and construction companies were involved: The Hochtief AG, a leading construction company which played a major role in the Third Reich, was commissioned to rebuild the halls into capable production facilities. A large scale expansion up to 40 or 50 mine chambers was planned. Another construction company was the company Koch & Mayer GmbH from Heilbronn. The aircraft company Ernst Heinkel AG had a leading position among the military companies in Kochendorf, commissioned to build experimental units for turbine He S 011, which was to be installed in the Messerschmitt Me P 1101 hunting aircraft. For this turbine, Robert Bosch GmbH and Siemens-Schuckert-Werke AG produced spark plugs, injection pumps and electrical materials. The Motorenwerke Mannheim AG had submarine engine components built in the mine. Only the production of machine guns could not be attributed to any company yet. A detailed permanent exhibition since 2012 can be visited in the Bad Friedrichshall Kochendorf saltmine.

From 1992 until 1998 in the context of increased migration and lack of dwellings for new immigrants the district Plattenwald was rebuilt as part of a flat building program of the state Baden-Württemberg. 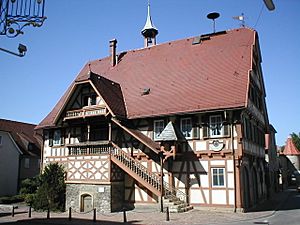 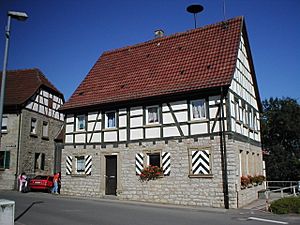 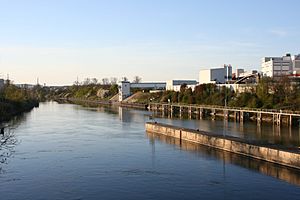 The Neckar Canal nearby the lock of Kochendorf

Bad Friedrichshall-Jagstfeld was an important railway junction and border station between Baden and Württemberg between 1869 and 1920. The large railway yard bears witness to this fact, in the middle of which the station building was placed.

At Bad Friedrichshall-Jagstfeld station the Elsenz Valley Railway and the Neckar Valley Railway (from Heidelberg via Sinsheim and Mosbach respectively) connect with the Franconia Railway from Stuttgart to Würzburg. There was also the Lower Kocher Valley Railway to Ohrnberg until 1993.

In Kochendorf and Untergriesheim there are further stations of the Franconia Railway, only served by RegionalBahn trains. The Duttenberg-Obergriesheim station on the same line was closed in 1971.

The Bundesstraße B 27 (Blankenburg (Harz)–Schaffhausen) passes through the town and connects to the Bundesautobahn 6. 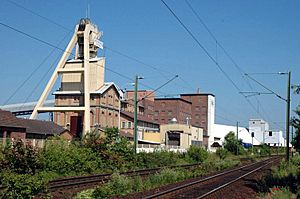 salt-mine of the SWS with shaft König Wilhelm II.

From 1899 until 1994 the Südwestdeutsche Salzwerke AG (SWS) ran the salt-mine Kochendorf and created a hollow space below Bad Friedrichshall and Neckarsulm of about 12 million cubic metres (420×10^6 cu ft). In 1901, the shaft was christened to William II. Until 1984, the mine had just one shaft at its disposal, when a 3.7-kilometre (2.3 mi) long subterranean connection to the plant of Heilbronn maintained by the same factory was built. It was also built to evacuate workers in case of emergency. Since 1994 the mine has been filled with rubble and hazardous waste. However, a visitor's mine is still open; it features a subterranean dome hall of the 1920s.

All content from Kiddle encyclopedia articles (including the article images and facts) can be freely used under Attribution-ShareAlike license, unless stated otherwise. Cite this article:
Bad Friedrichshall Facts for Kids. Kiddle Encyclopedia.