Bad Reichenhall is a spa town, and capital of the Berchtesgadener Land district in Upper Bavaria, Germany. It is located near Salzburg, and encircled by the Chiemgauer Alps. Mount Staufen (1,771 metres (5,810 ft)) and Mount Zwiesel (1,781 metres (5,843 ft)) are both near Bad Reichenhall. Bad Reichenhall is a traditional center of salt production, obtained by evaporating water saturated with salt from brine ponds. The town was the site of a disaster on January 2, 2006, when the roof of the town's ice rink collapsed under snow, killing 15 and injuring 34 others. 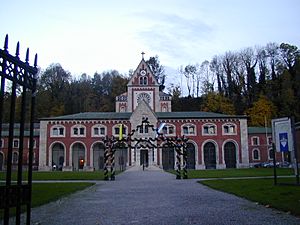 Fifteen people, twelve of them children, died in the collapse of the Bad Reichenhall Ice Rink on 2 January 2006. Thirty-four people were injured in the accident.

All content from Kiddle encyclopedia articles (including the article images and facts) can be freely used under Attribution-ShareAlike license, unless stated otherwise. Cite this article:
Bad Reichenhall Facts for Kids. Kiddle Encyclopedia.